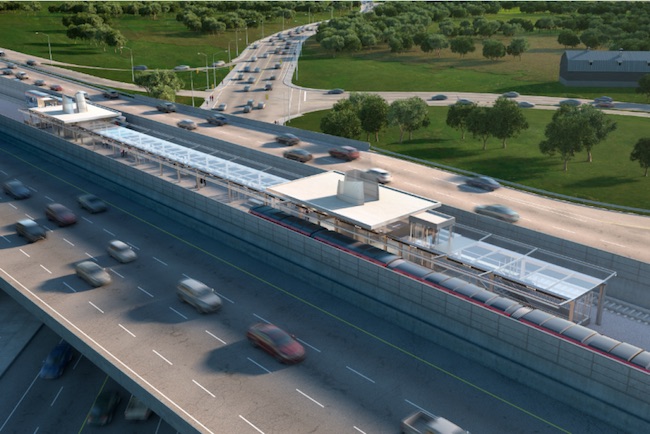 A rendering of Montreal Station on the eastern extension of the Confederation Line. PHOTO: City of Ottawa

Construction had yet to wrap up on Ottawa’s new Confederation Line when the city green-lit an expansion of the light rail network earlier this year. After a number of delays and a troublesome launch, the line entered regular service this fall. Meanwhile, crews had already started early work to extend the brand new line to both the east and west.

Bird Construction Inc. will soon be joining the build team. The company said Dec. 20 it has been subcontracted by the construction consortium in charge of delivering the project to build seven new stations as well as a maintenance and storage facility for the extended line.

East West Connectors, made up of Kiewit and Vinci Group, are leading construction on the approximately $2.6 billion project, officially known as the Stage 2 Confederation Line Extension. The work will add 16 new stops to the recently-opened LRT, extending it a combined 27 kilometres to the east and west.

Bird did not disclose the value of the deal to build the new stations and maintenance facility.

The job is one of two designed to reshape transit infrastructure in Ottawa. A separate $1.6 billion project to extend and rehabilitate the north-south running Trillium Line is also underway in the Canadian capital.

Work on the Trillium Line is scheduled to be complete by 2022, while construction of the extended Confederation Line is expected to wrap up by 2025.