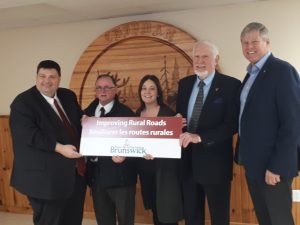 The investments are part of a $30 million investment in the Greater Fredericton region.

A series of paving, chip seal and culvert repair projects have been announced for Fredericton, N.B.

The province will invest nearly $10 million in road repairs for the Chipman, Minto, Oromocto and Lincoln areas this year.

A total of $6.8 million will be invested in the villages of Chipman and Minto. The Town of Oromocto and community of Lincoln will receive a total investment of $3 million.

In Chipman and Minto, the Department of Transportation and Infrastructure will pave 5.8 kilometers of Route 105, from the Sheffield/Maugerville parish line to the Church Road.

From the Fredericton city limits to Balsam Avenue, 5.4 kilometers of Route 10 will also be paved, in addition to 1.8 kilometres of Redbank Drive, from Maple Street to the Chipman village limit.

On Route 10 from Northside Drive to the Minto village limit, 1.2 kilometers of road will be paved. Work will also continue on the Fisher Brook Culvert No. 1.

The department will also pave 2.4 kilometres of Restigouche Road, from Restigouche North Road to Broad Road, and 3.5 kilometres of Nevers Road, from Route 102 to the interchange of Route 2 and Route 7 in Oromocto and Lincoln. Repairs are also planned for a culvert on Route 7 that suffered storm damage.

“Getting people and goods where they need to go, safely and efficiently, is crucial to economic growth and job creation,” said Bill Fraser, transportation and infrastructure minister. “Your government recognizes the link between better roads and economic development and we have committed to making the strategic investments needed to improve our infrastructure and keep the economy moving forward.”

New Brunswick’s $688 million capital budget includes investments in buildings, highways and bridges. Investments in infrastructure are a component of the province’s Economic Growth Plan, a framework that aims to grow the economy and create jobs.