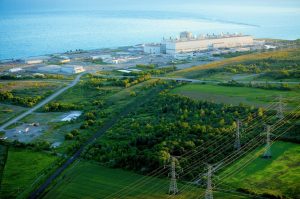 In December, OPG announced it would work with GE Hitachi to work toward constructing Canada’s first commercial, grid-scale SMR. Under the early preparation contract, E.S. Fox will bring water, electrical power, information technology and road services to the site.

Work is expected to begin later this year, when OPG receives necessary permits and regulatory approvals. Approval is required through the CNSC before any SMR construction work can begin.

“This early work sets the stage for deployment of the type of clean, safe new electricity generation Ontario needs as demand begins to rise due to electrification,” said Ken Hartwick, OPG president and CEO. “We look forward to seeing the site begin to take shape, with help from trusted partner E.S. Fox, as OPG paves the way for the next generation of nuclear power in Ontario.”

Ontario, New Brunswick, Saskatchewan and Alberta have signed a memorandum of understanding to collaborate on the advancement of SMRs as a clean energy option to address climate change and regional energy demands, while supporting economic growth and innovation.

A single SMR roughly 300 megawatts in size can prevent between 0.3 megatonnes (MT) and 2 MT of greenhouse gas emissions per year, depending on where it is located and what kind of power it is displacing.

“The world is watching Ontario when it comes to SMRs,” said Todd Smith, Ontario’s Minister of Energy. “I look forward to seeing the progress made by E.S. Fox and OPG as we prepare to deploy Canada’s first grid-scale SMR. This project will create good jobs and clean energy while cementing our reputation as a global hub for nuclear technology and SMR expertise.”