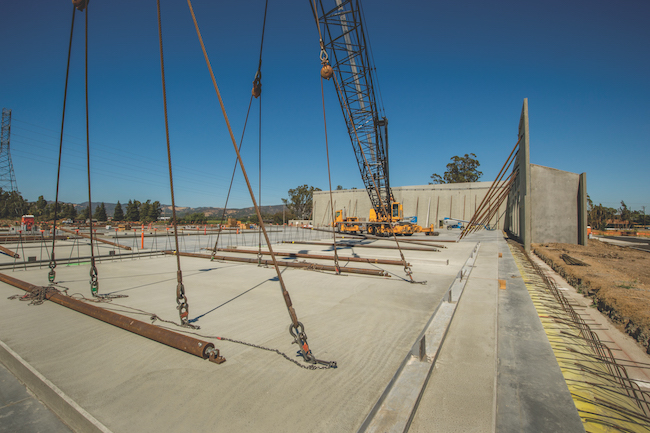 With wooden forms spread along a floor slab like sidewalk segments and a crane nearby ready to lift cured wall panels into place, this isn’t your typical site-cast concrete.

The tilt-up building process, which traces its roots back more than a century, boils down to casting concrete wall panels and other building elements on forms laid flat on a building slab, or a specially-built casting bed. Once cured, a crane simply hoists — or “tilts-up” — the panels into place. As the individual concrete panels are raised, crews secure wall segments with braces and then fasten the separate pieces together.

Incorporating some of the perks of both cast-in-place and off-site precast, the tilt-up method continues to earn market share, chipping away at the more conventional approaches.

According to the Tilt-up Concrete Association, dozens of tilt-up buildings have gone up across Canada in British Columbia, Alberta, Ontario and Nova Scotia, ranging from offices and business parks, to big box stores and schools. While there has been some uptake in Canada, particularly on the West Coast, the method remains far more popular south of the border, with thousands of buildings erected using tilt-up each year.

It’s also being used for an increasing set of structures. Once limited to large buildings with basic layouts, new methods allow builders to use tilt-up for a wider range of designs. A recent project in North Miami, for instance, saw tilt-up panels used for the cladding of a nine-storey student residence. Hundreds of panels have also been used to build complex buildings such as prisons.

No building method is foolproof. Famed inventor Thomas Edison was an early backer of tilt-up in the early 1900s, but it wasn’t until decades that tilt-up gained momentum, driven by advances that made it more practical and economical. Today, tilt-up’s main benefits revolve around the speed and simplicity of construction, as well as the durability of concrete structures.

Keeping work firmly on the ground is one major perk. Contractors casting tilt-up wall panels can skip the scaffolding and vertical formwork. At the same time, windows and doors can be easily built into the formwork, simplifying the opening process for workers. When space is at a premium, however, tilt-up’s tendency to spread out horizontally can become liability. Panels can be stacked on top of each other, but tilt-up does require a relatively large project site so formwork can be built, making the method unsuitable for tight urban locales.

Unlike precast concrete, which is typically formed using reusable molds in a manufacturing plant, tilt-up generally requires custom forms. While this adds cost, contractors save on transportation and related logistics.

Advocates of tilt-up also tout the environmental benefits. Panels can be made of solid concrete, but much of the time, sandwich-type panels with built-in insulation are preferred. Concrete’s thermal mass — its inherent ability to absorb and hold onto heat — helps owners slim down building mechanical systems, saving on costs and emissions. Of course, designers do need to weigh these longer term benefits against the carbon embodied within the concrete itself.

With concrete as their main building blocks, tilt-up structures typically have a durability edge over up those others relying on wood or metal.