Spanning the border: COVID-19 may be a game-changer, but hasn’t halted progress at Gordie Howe bridge 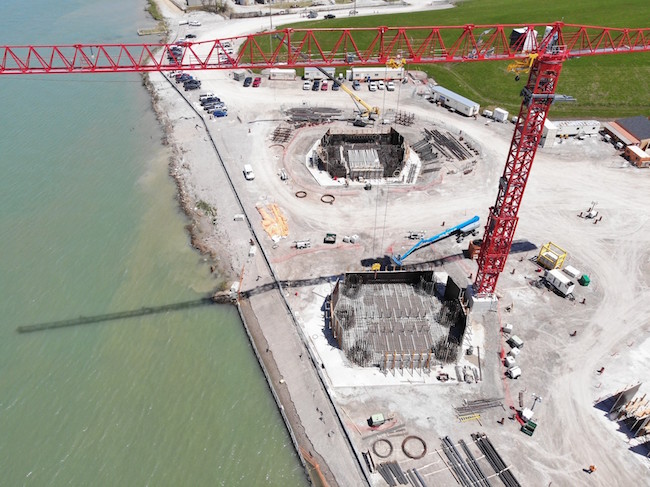 Tower foundation work at the site of the new bridge, which will span 853-metres. PHOTO: WDBA

When shovels broke ground on the Gordie Howe International Bridge project at the Windsor-Detroit border crossing in October 2018, the notion of a game-changing pandemic was largely the domain of science fiction. Now, it’s an everyday reality, with COVID-19 forcing organizations and enterprises the world over to meet a new, demanding environment. While transportation-related construction has been prioritized due to the importance attached to infrastructure and maintaining supply chains, managers of even the most critical projects have struggled to meet ever-evolving demands and challenges — and the Gordie Howe is a case in point.

Border crossings between the United States and Canada have been shut to travel deemed non-essential since mid-March, yet, construction of this newest link has carried on despite unprecedented physical distancing strictures, shortages of materials, travel restrictions and the acknowledged likelihood that age-old societal norms will be significantly transformed for years to come. In June, when project leaders wanted to trumpet a grant program that’s been integral to community relations efforts, proponents shelved the usual news conference and celebration in favour of a virtual assembly, with participants showing up in offices and living rooms, albeit with an artfully designed bridge backdrop.

“We’re unable to host a tour of the construction sites but we’ll be providing some B-roll which shows the tremendous work currently underway on all four components of the project,” Windsor Detroit Bridge Authority CEO Bryce Phillips said when he welcomed journalists to the online event. “We look forward to hosting you on-site and in person in what I hope will be the near future, but with these unprecedented times everyone has had to adapt, and that includes our team. The health and well-being of our staff, contractors, stakeholders and the public is paramount.”

In response to the virus, project leaders shuttered community liaison offices in both countries and enacted a no-visitors policy at its Windsor headquarters. “We provided the necessary equipment for our staff to work remotely so we could continue our oversight… and remain in contact with each other and with the public and stakeholders,” Phillips explained. Wearing masks, screening daily for symptoms, and working two metres apart — six feet in the U.S. — crews proceeded with the tasks that were underway when COVID-19 was declared a pandemic in mid-March.

Aaron Epstein, CEO of Bridging North America, the construction consortium leading the project, outlined accomplishments to date. With final designs undergoing specialist review, the preparation that constitutes Phase 1 is well underway. By mid-June, crews had demolished and were already replacing three bridge crossings along the Interstate 75 approach to the bridge on the Michigan side. The reconstruction was needed to adjust for a redesigned road profile and includes excavation, erection of abutment walls and pile driving to build solid foundations for roadwork that will eventually follow. 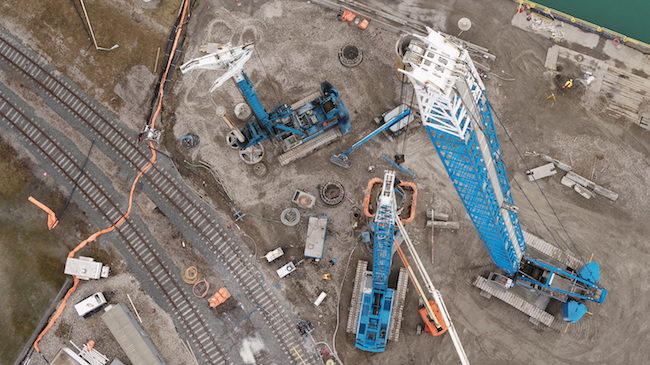 The build team has continued work on tower footings and foundations for the bridge this summer. PHOTO: WDBA

At the Canadian port of entry, crews had installed more than two-thirds of 150,000 prefabricated vertical ‘wick’ drains and roughly 650,000 tonnes of engineered fill as surcharge. Workers at the U.S. entry have 57,600 of 157,000 wick drains in place, along with fill.

Early work on the bridge itself is also coming together. Two dozen ten-metre-diameter drill shafts for the bridge footings have already been completed, and by mid-June the construction team, made up of ACS Infrastructure, Fluor and Aecon, were working on tower footings and foundations for the main bridge. “We’re expecting to see some of those tower foundations continue throughout the summer, and you’ll be able to see some of that above the ground later this year,” Epstein said.

While COVID is an undeniable impediment, Phillips and Epstein told the virtually assembly the projected end-of-2024 completion date remains unaffected. Epstein confirmed some productivity impacts stemming from scheduling work crews, getting them on-site, and training them on government safety protocols and evolving industry standards. “It’s a complex project, and one of the things we do is figure out challenges, whether they’re engineering challenges or project management challenges,” he said. “The pandemic is ongoing, so at this point in time the best information we have and the best scheduling we have is that we’re still on or close to schedule.” In fact, Phillips noted, the project has consistently passed Ontario labour ministry health and safety spot checks. “A lot of stuff is being learned by a lot of people… and they’re doing a very good job ensuring construction continues safely,” he said.

The project also faces many of the technical hurdles that come with building what’s billed as the planet’s fifth longest cable-stayed bridge and one that stands to have the longest main span of any cable-stayed bridge in North America. “The challenge is always the geotechnical work, the stuff below the ground, because ground conditions always give you something unique,” Terry Poole, construction manager with Bridging North America, tells On-Site. “Each drill shaft acts a little bit differently, and luckily we’ve had some really good specialty contractors helping us.” 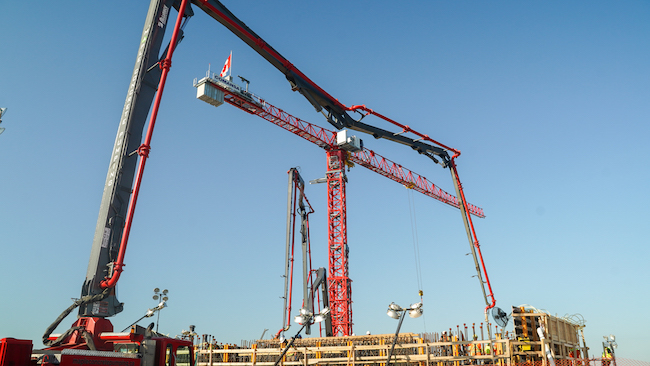 A concrete pour at the bridge. The pandemic has slowed progress, but the timeline remains intact. PHOTO: WDBA

Poole described ground conditions as typical to southern Ontario — a layer of clay over top of bedrock. And, with the bridge crossing the Detroit River, the soil is saturated — a condition exacerbated by historically high water levels upstream in Lake St. Clair. Weather in general is a year-round challenge, and specified winter plans have crews tarping fresh concrete work and pumping in heated air to facilitate nighttime curing.

The immediate proximity to water also demands precise engineering to manage heavy equipment and complex operations. For instance, engineers needed to redesign the tie-back system and move its elevation up a notch to keep it above water levels. “The planning aspect that goes into the whole effort has been challenging and Terry’s team has done a great job in doing that in order to bring the cranes in that we need to do the work,” Epstein says. “They’ve had to figure out how to make sure we have enough stability to support all the construction equipment so close to the river.”

Of course, the main challenge involves designing and erecting an 853-metre span that has no footings in the water. This avoids impeding river traffic and potentially affecting fish and other aquatic species, yet requires deft engineering and the right tools for the job. While barge-mounted cranes are often integral to major bridgeworks, crews have two 50-tonne-capacity tower cranes on dry land to help place footings, towers and other components. The 820-foot-tall Comansa cranes will be slightly higher than the 722-foot towers. Two 330 ton crawler cranes on each side of the river will help in the back-span area for the bridge approaches, and smaller hydraulic cranes will also chip in as needed. Yet, while the hoisting power is considerable, crews will still need to ensure machines don’t handle more than their rated and engineered capacities and will cease operation when winds become too strong. “Everything will have a pre-pick plan on paper and we’ll go through everything,” Poole explains.

The lengthy span itself had to be designed to withstand the strongest potential gusts. The project team undertook wind tunnel tests, using models to replicate wind conditions in a specially purposed room. “We put it in a couple of times as the design progressed,” Poole explains. “We’d see the reactions, then go back and tweak more things so the engineering dovetails with how the builders are going to build it and what equipment we need. There’s lots of moving pieces, lots of meetings, and lots of drawing, iterations and reviews.” 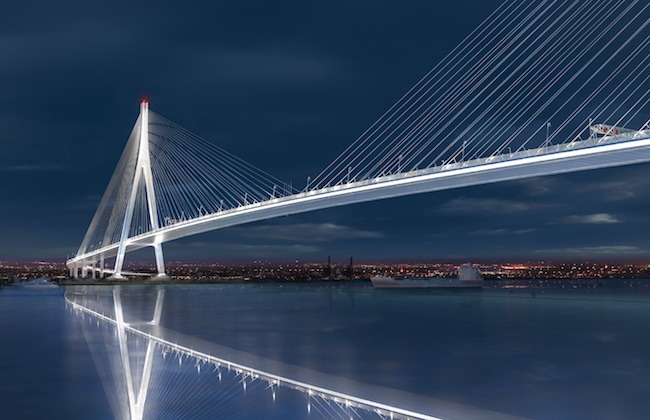 A rendering of the completed cable-stayed bridge over the Detroit River. PHOTO: WDBA

While the physical challenges are considerable, political and financial underpinnings have also required careful handling. Gordie Howe played for the Detroit Red Wings, but for his namesake bridge, Canada is footing the entire CAD$5.7 billion fixed price contract up-front by means of a P3 arrangement that includes all construction and a 30-year operations period. And, while the bridge will be jointly owned, Canada is looking to eventually recover costs. Mark Butler, director of communications with the Windsor Detroit Bridge Authority, said the Crossing Agreement Canada and Michigan signed in 2012 stipulates no cost or financial liability to Michigan or its taxpayers as a result of the state’s participation with this project either during the construction or once the crossing is operational. “As such, Michigan will not receive any of the toll revenue from the operation of the crossing until all costs related to the project have been recouped,” Butler said, adding that the U.S. government is responsible for fitting up and staffing border operations.

There may also be the element of pay-back time. The Bluewater Bridge, not far north, between Port Huron, Mich. and Sarnia, Ont., was financed entirely by the U.S. “I’m not saying it’s our turn, but we were in a position where we were able to finance it,” Butler said. “We were happy to do that, recognizing that it’s going to be good for the Canadian economy, indeed for both countries.” In fact, the Gordie Howe has enjoyed cross-partisan support from both countries, and multiple jurisdictions conducted complex environmental and other permitting processes. “It’s been said to be one of the most complicated and complex joint environmental assessments in Canadian history,” Butler said. “We had to get all those permits in place before we could get the Presidential Permit and start moving.”

This article first appeared in the August 2020 edition of On-Site. Click here to access the full issue.

It is also one component of On-Site’s 2020 Infrastructure Report. The complete report is available here.