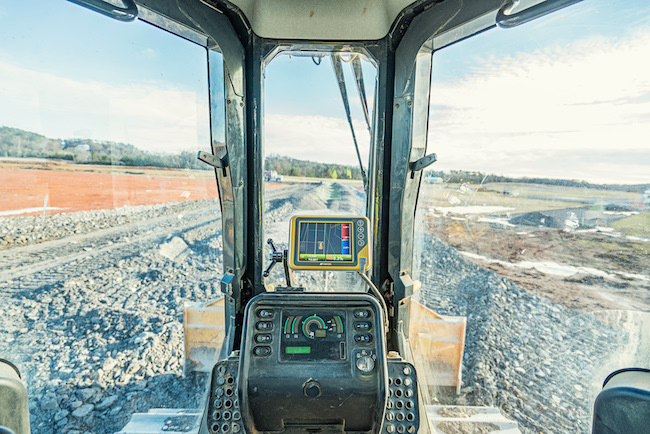 There have been significant developments in machine control, driven by technological advancements and industry trends. Used on earthworks equipment since the mid-1990s, machine control systems utilize satellite network data and sensors to determine geographic coordinates and assess grade. Such systems can also automate equipment functions and link to online networks to share information.

“There’s been a major swing with excavators … Traditionally, excavators were used as a loading device. Now they’re doing loading but can also do grading so there’s less cleanup work for the dozers behind,” says Jamal Mohammed, director of Sales and Professional Services at SITECH Mid-Canada, which distributes Trimble machine control systems.

“I know for a fact we’re selling more excavator systems than we are dozer systems,” he says. “Dozers are still a huge part of the market but overall, for the year, we’re slightly more ahead on excavators than we are on dozers.”

“The biggest return in the machine control sector is actually on an excavator,” he says.

Excavator operators seeking to avoid reworking a section sometimes overcompensate and dig too deeply with their bucket, Jones says. This means more material has to be placed in the trench or foundation being dug, at additional cost to the contractor.

On top of this, excavator operators have to exit their cab to check grade in a trench or wait while a labourer performs this task. By installing a machine control system, excavator operators can determine grade quickly, safely and accurately, leading to more precise digging and greater efficiency, Jones added.

While the introduction of 3D technology in machine control has given operators a much more accurate view of the terrain they’re dealing with, 2D remains a mainstay.
“All of our 3D machines have full 2D functionality built into them,” Birch says, adding that 2D equipment can also be upgraded to 3D. “We also have dedicated 2D systems that we run for dozers, graders, excavators and skid steer attachments.”

Increasingly, machine controls are being installed right in the factory, ready for use as soon as the dozers, wheel loaders, excavators, and other pieces of equipment leave the plant.

“You can get Case machines from the factory wired for Leica … You can get John Deere dozers that have full Leica wiring on them. You can order from the factory,” Birch says. He predicts the trend toward factory-installed machine control will continue.

While highway builders probably still hold an edge, Birch says, contractors working on sewer and water projects have begun snapping up excavators with machine control as well. “That’s maybe contributed to why we’re seeing so many excavator sales. The sewer and water-main guys, they might have a dozer for cleaning up but typically their whole fleet is excavators,” Birch says.

Unmanned Aerial Vehicles, better known as drones, are also increasingly being seen as a complementary asset to machine control systems. Drones can fly over worksites, recording and reporting production data and geographic coordinates. This information can be used by operators or office staff to augment machine control data and performance.

“A couple years ago, people started getting into drones because it was kind of neat,” Mohammed says. “A drone is able to do data collection a lot faster than doing a survey on the ground. You can fly a drone and in 20 minutes cover many different hectares … It becomes a data collection unit that the customer can use.”
Automation is another technology area experts are watching closely.

“We’re moving to levels of autonomy where there’s one operator for many machines,” says Scott Crozier, general manager of Civil Engineering and Construction at Trimble Inc. “So you’ve got three or four dozers pushing large amounts of material on site. There might be one person on site controlling three to four dozers remotely.”
Needless to say, this scenario would be limited to large construction sites—you won’t see it on a small site or in crowded urban areas, Crozier notes.

For all the advantages such systems offer, most construction equipment currently in use in Canada isn’t equipped with machine control. This is largely due to the hefty price tag of the technology.

Last year, Birch estimated that less than five per cent of existing earth moving equipment in Canada had machine control. Today, he said that figure may be hovering around 10 per cent.

“Some of our big customers have a pretty high implementation rate,” he says. “Then other customers we have, they’ve got huge fleets and are only just getting into machine control. Plus there’s all the little guys with two machines, four machines that don’t have anything on them.”

Insiders expect adoption rates to climb in the near-future, thanks to improved technology, the increased availability of factory-installed systems and contractual obligations that force contractors to adopt the technology.

“The conversation now is, ‘if you’re in today’s game, this is what you need to have,’” he says.

Leica
Leica’s MCP80 3D machine control panel was released earlier this year, initially for use on curb and gutter and concrete machines.

“Now it’s running all of our core machines—excavators, graders, dozers, wheel loaders, snow groomers. All of that is running with the MCP80 panel with docking stations,” Birch says.

Leica machine control systems can also be connected to ConX, the company’s cloud-based communications solution, which allows for the sharing and storing of data and other functions.

3D-MC Max-equipped dozers have GNSS (Global Navigation Satellite System) antennas mounted on the cab roof, removing the need for masts on the blade. This design feature enhances operator visibility, safety and productivity. According to Jones, there’s no need to install and remove antennas, masts or cables on a daily basis—a once time consuming activity.

He describes 3D-MC MAX as the latest evolution in Topcon’s 3D MC line.

As an option, Topcon’s machine controls can be connected online to Sitelink, the company’s communication network.

“At the moment we just have the dozer system and excavator system out there but there’s been a significant increase in functionality added to that platform,” Crozier says. “Every quarter, we add new functionality.”

The excavator system offers 3D integrated aftermarket excavator automatics capability—described as an industry first. This makes it easier for operators to cut to grade then hold grade, increasing accuracy and efficiency, Crozier says.

Earthworks for dozers also features twin-mounted GNSS receivers on the cab roof, rather than the blade.

Both products run on an Android operating system.

“Trimble develops its own Android display specifically for the industry,” Crozier notes. “Typically we find contractors want to have a rugged and built-for-purpose display, which is what Trimble provides.”