Acadian Construction looks to corner the market in Atlantic Canada 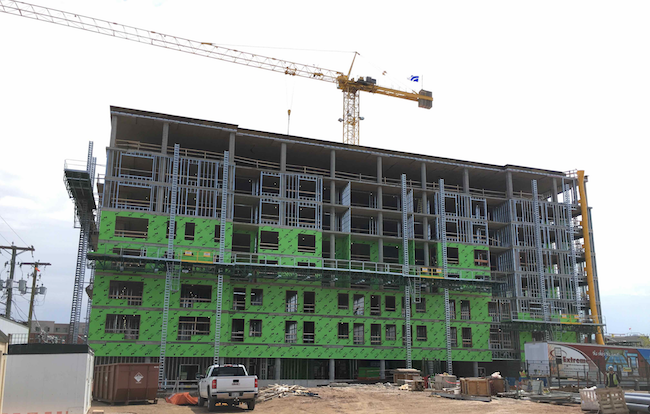 The New Brunswick contractor more than doubled its revenue in 2017, booking $85 million in sales over the course of the year, compared to $40 million during the previous 12-month period. The strong growth catapulted Acadian to the top of On-Site’s tally in the 50 of fewer employees category.

Matthew Carreau, the company’s director of operations, described 2017 as a “banner year” for Acadian.

“It’s really us performing and really building that relationship with the clients for the best project experience – that’s what’s been the difference with us the past little while,” he said.

Based in Dieppe, N.B.—part of the Moncton metro area—the family-owned company has a 60-year history in the province and has since branched out to other markets across Atlantic Canada. Its current business breaks down to about 40 per cent industrial, 40 per cent multi-unit residential and 20 per cent commercial. It has 49 employees on payroll, though that figure is subject to the usual seasonal fluctuations.

Along with building strong relationships with clients, subcontractors and consultants, the company owes some of its 2017 success to a new, quickly emerging Canadian industry.

With the marijuana business poised to boom, Acadian has got in on the action. After booking some preliminary work for an unnamed medical marijuana firm, the contractor was able to keep itself involved with the client as the scale of the project grew. From an initial deal worth about $5 million, Acadian now expects work on the project to be worth about $70 million over the next couple of years.

The emerging industry is one example of how the evolving Canadian economy is creating new opportunities for contractors.

Among other projects, Carreau pointed to a recently-completed skating oval in Acadian’s hometown of Dieppe and a new $15 million contract to build a community centre in Moncton as two recent jobs the company is particularly proud to be a part of.

With a small sales staff, Acadian focuses its resources only on projects it identifies as the right fit for its team.

“We don’t take a shotgun approach to bid all kinds of jobs and swing for the fences every time and hope we land one,” Carreau said, adding that the strategy has translated to a very healthy “batting average.”

The company also recently implemented Procore Technologies’ construction management software, a move it says has allowed it to streamline its processes and better connect all parties involved in a project.

After raising the bar last year, Acadian has no intention of sitting still.

The company aims to grow its revenue by between 25 per cent and 50 per cent in 2018 while continuing to expand to new areas in Atlantic Canada.