From the editor… Tech keeps trucking 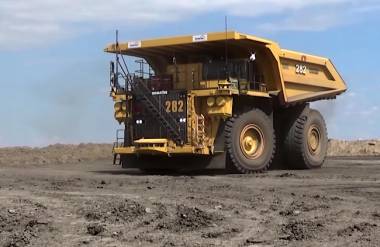 One of the heavy haulers during the oil producer’s pilot project. PHOTO: Suncor Energy/YouTube

Cruising along a pre-programmed route at Suncor Energy Inc.’s North Steepbank mine outside Fort McMurray, Alta., massive Komatsu haulers capable of trucking nearly 400 tonnes have been operating autonomously for months.

The oilsands heavyweight disclosed plans to bring 150 of the hulking autonomous vehicles online at several Canadian mines early this year.

The rollout, which is among the most ambitious programs of its kind anywhere to date, is scheduled to take six years.

But the project won’t stand apart for long.

Self-driving pilots for consumer vehicles, for instance, have cropped up in many parts of the country and every facet of the economy has been working to take advantage of driverless technology.

Most experts agree – and the early evidence bears out – that industries such as mining, which operate in remote areas that can be easily cordoned off, will be the first movers on full vehicle autonomy. Controlled warehouse or manufacturing environments also lend themselves particularly well to vehicle automation.

As is often the case, construction won’t be the first on the ground. There’s little expectation that the disruptive wave could bypass the industry altogether though. Semi-autonomous systems have been burrowing deeper into job site equipment for years – from grade assist functions in excavators and dozers, to articulated trucks that monitor stability and payload to prevent rollovers, as seen in the latest Cat models.

As firms look ahead to 2019, there’s good reason to begin testing the waters.

The quickly constricting labour market is one excellent excuse for doing so. The much-discussed, worrisome wave of 250,000 worker retirements over the next decade, as forecast by BuildForce Canada, will eventually force contractors to action.

Repetitive tasks are the low-hanging fruit for autonomous technology.

With this in mind, hauling material or building products around large job sites will likely prove a logical first step. Volvo Construction Equipment, for instance, is currently running a pilot project that uses fully autonomous haulers at a quarry in Sweden. The project, which is also testing out new electric equipment, has found significant early success, potentially reducing operating costs by about 25 per cent. Autonomous grading operations also hold tremendous promise and could be rolled out in conjunction with haulers. For both applications, much of the technology necessary for full autonomy already exists.

Beyond earthmoving, the immediate future is murkier, but autonomous technology is likely to leave its footprint on every aspect of construction. I’d encourage you to dive deeper into topics such as GPS mapping, robotic masonry and modular construction in this issue’s Software column.

Ultimately, contractors are only as good as the gadgets in their toolkits. Just like it has with every major innovation – from the elevated dozer sprocket to drone mapping – it pays to be ahead of the curve.

This column originally appeared in the December 2018 issue of On-Site. You can read through the complete issue here.