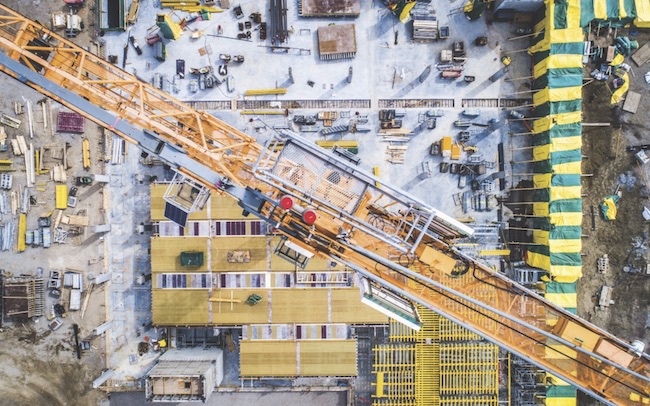 Innovation, both in technology and within companies themselves is shaping the future of construction. PHOTO: Getty Images

The term “innovation” conjures up images of drones, virtual reality, state-of-the-art sensing technology and leading-edge building materials. These products, however, are only enablers—the real innovation is in the changes companies have to make to adopt them.

Unlike manufacturers, contractors don’t develop their innovations in R&D departments. “Our organization doesn’t do lab research,” says David Filipchuk, CEO of PCL Construction. “Most of the discoveries and innovations, technology or otherwise, in the way we execute work happen at the workspace.”

Construction is essentially a collaborative enterprise, where diverse skill sets and resources must coalesce in real time. Compared with a controlled factory situation, a construction site is subject to far more variation, making it susceptible to errors, rework, delays and cost overruns.

The push to innovate, therefore, is about improving collaboration in order to reduce variation and create a better outcome for the customer. This involves breaking down silos and promoting a more team-like approach between owners, designers, consultants, general contractors and trade partners.

“The future of construction is more collaborative and agile, with everybody working towards a common purpose,” says Mary Van Buren, president of the Canadian Construction Association (CCA). “That can lead to more innovation as well, because people are working collectively to solve problems, as opposed to inheriting what was given to them in the chain in front of them.”

Innovation, Van Buren notes, has become a top priority for the CCA, which has helped establish institutes such as Canadian Construction Innovations (CCI), which fosters innovation in the industry. Recent CCI projects include a clearinghouse where industry stakeholders can share their innovations, information aimed at fostering the use of drones and an incubator for energy conservation in the heavy construction sector.

Technology can play a significant role here. “The big advantage of [Building Information Systems] and other technologies like that is your ability to integrate people’s work—that’s the game changer,” says Thomas Strong, chief technology officer at EllisDon.

When all the trade partners incorporate their plans into a 3D model, for example, this allows everyone to identify clashes and scheduling conflicts before they arise on the jobsite. “This way, we’re able to be proactive rather than reactive,” Strong adds.

Construction, however, is widely criticized for being slow to adapt to the digital age. “I’m sure you’ve heard that construction is not a very productive industry,” Van Buren says. “Technology is one solution. However, BIM is not that widespread, even though it’s been around for 10 years.”

One of the stumbling blocks is that traditional methods often remain the legal standard. “Our industry is not set up for working in a BIM/VDC environment,” says George Ikonomakis, national VDC and BIM manager for Bird Construction. “The industry still submits contract documents through hard copy or digital format drawings for tenders, so 3D model files are used as ‘reference only.’ This doesn’t allow us to take advantage of the intelligence that can be found in 3D models.”

Still, there is no shortage of innovative techniques coming down the pike, according to Clint Kissoon, chair of the school of Construction Management at Toronto-based George Brown College. “The industry has embraced a lot of these ideas, but these are only the tools to innovate. The one thing we’ve not been able to look at is behaviours that determine how we adopt these new tools and processes.”

The biggest single challenge the industry faces today is a massive shortage of skilled labour, fuelled by the impending retirement of 250,000 workers, or 20 per cent of the workforce, over the next decade.

“As we continue to grow, hiring is a very real challenge,” says Patrick Stiles, Toronto-area regional vice-president at Pomerleau.

“Canadian contractors are lucky in that there’s lots of work out there,” says Juan Chica, vice-president at Bird Capital. “Our challenge is related to qualified labour. Baby boomers are retiring, and as an industry we’re not very good at passing down their knowledge. We’re seeing this lack of qualified people for all players—contractors, consultants, architects, engineers, and owners. So we all need to adapt our management practices to the new reality of potential employees.”

The need is not only to hire, but to ensure that industry knowledge, acquired over decades by employees who will soon retire, isn’t lost forever. To accomplish this, firms will have to bridge the generation gap between tech-savvy millenials and older workers who have not embraced technology.

“Contractors have a huge problem hiring young talented people,” says Pouria Ghods, co-founder and president of Ottawa-based Giatec Scientific Inc., which provides concrete sensing technology for the construction industry. “There have been studies that have shown that people in the younger generation are not interested in working for companies that are not innovative and open to change. They’re hesitant to join the construction industry for that reason.”

Even those who have chosen construction as their career choice are frustrated, Kissoon notes. “Our graduating students are going out there, but they’re not seeing the development they were expecting,” he says. “They’ve been trained to harness the new technology, but companies are showing this reluctance to change.”

This isn’t just about using new tools—as Samil Junuzovic, project director at Bird Construction points out—technology is part of the work environment that millenials have grown up with. “With internet, and people having everything at their fingertips, everything is changing, not just construction,” he says. “Many of the senior superintendents are less reliant on current technology. But the younger folks want information.”

The challenges of hiring younger workers, however, aren’t only related to technology. “The young generation has a very different perspective on the balance between private and work life,” Chica says. “That’s challenging, because if you have a deadline on a project, and need somebody to put in so many hours a day, some will say ‘that’s not for me.’”

This can be especially problematic for larger firms that need to move specialized talent both around the country and internationally. “Construction requires talent mobility in a big way, but the demographic shift goes against that,” Filipchuk says. “This is a situation that didn’t exist a decade ago.”

On the hiring front, many contractors are working more closely with the schools to understand the expectations of potential job candidates and help communicate the benefits of working in the industry. “We’re a part of industry-wide efforts to work with communities to encourage kids to see that construction and engineering are great career choices that lead to sustainable, well-paying jobs,” says Ryan Tones, a district manager at Kiewit Corp.

“Employees want to work for a progressive, current, plugged-in company,” Filipchuk says. “Construction gets a bad rap for not being innovative, but that’s not entirely accurate. There’s lots of technology that’s being deployed in innovative ways, and that’s one of the ways we differentiate ourselves when we’re hiring.”

Hiring isn’t just about attracting tech-savvy millenials, however. Van Buren notes that women make up only three per cent of the construction workforce, and that some segments of the population, including First Nations, are under-represented in the industry. “If you want innovation, you need diversity,” Van Buren says. “You need different experiences. You need people who are looking at problems in a different way. So having a more diverse workforce will help with adoption and innovation.”

One of the challenges of improving knowledge transfer from more experienced workers is making the technology accessible to people who have yet to embrace the digital age. The key is to make it less threatening, according to Tanner Clark, director of BIM/VDC Construction Services at Calgary-based Stuart Olson.

“When I’m speaking about applying technology to our projects, I try to use common language that everyone will understand,” he says. “I explain that we are using the same information we have always used, but that the new technology will help us see things we weren’t able to see before, so we can quickly and clearly identify potential concerns before they arise on the jobsite.”

Another point Clark emphasizes is getting subcontractors to see the advantages. “When you get your trade partners to use the system to work through any issues before they get on site, that helps them understand the benefits,” he says. “And the next time we work with that firm, they’re ready to go. That’s the innovation push that’s driving our industry forward.”

BIM systems can also help transfer knowledge from older workers to the younger generation. For example, as Clark points out, a 3D model is a great visual teaching tool where a more experienced worker can show a younger colleague what will work on the jobsite and what won’t.

Striving towards a win-win

The skills crunch facing the industry may be a blessing in disguise.

As the industry strives to better suit the needs of younger workers, it is being forced to take on its perennial silo problem that not only produces suboptimal outcomes for customers, but causes untold stress in the work environment. The change has the potential to create great opportunities for workers at all levels to get involved in interesting and challenging work that will help move the industry forward.

“We’re seeing a cultural shift away from ‘let’s just get the job done and move on,’” Clark says, “to a culture where we take the information that we have at our fingertips and use it to enhance our processes, and deliver things in a much more effective way.”

Another trend is a push to establish collaborative relationships earlier on in the project cycle. “Teaming up early on allows us to establish better strategies to match our clients’ expectations and deliver a better overall product,” Stiles says.

Many firms, including PCL, are implementing lean construction methodologies, which help break down silos and create a more holistic approach. “The main benefit of lean is that it approaches the project as a whole, versus the more traditional method where you’re concerned about what we call local optimization,” says Justin Bova, president of Winnipeg-based lean construction firm Pretium Projects Ltd. “Lean forces people to sit down in a room and solve problems together. That increases teamwork, morale, and project momentum, and ultimately ensures better value for the client.”

Innovation in the construction industry is, as noted earlier, not confined to a designated group, so there are lots of opportunities for people to innovate. “Every jobsite has the potential for innovation,” Strong says. “The challenge is capturing those innovations on the jobsite level, and identifying which ones it makes sense to operationalize across the rest of the business.”

“It’s our role as managers to give our people permission to explore, innovate, and make those small bets in the interest of breaking the old paradigms, and finding better and more innovative ways to execute,” Filipchuk says.

One in 13 Canadian workers make a living in construction