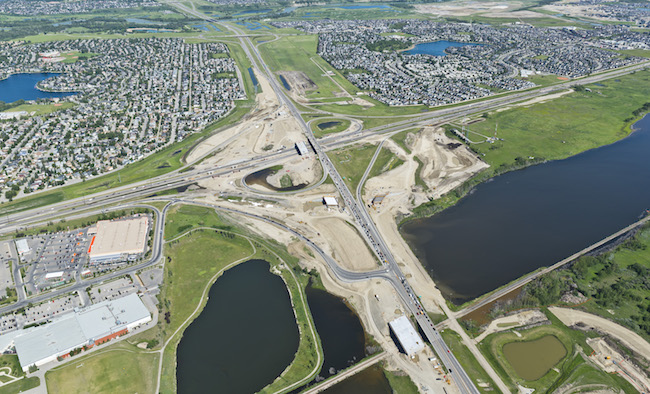 Planning for Calgary’s ring road got underway in the 1970s. It’s now a few short years away from completion. PHOTO: KGL Constructors

Calgary’s new ring road is well on its way to becoming a full-fledged loop. Northeast and northwest sections opened to motorists wanting to bypass the city in 2009, and a southeast section was added four years later. If all goes according to plan, a southwest quadrant will open in late 2021, with the remaining nine kilometres on the westernmost fringe scheduled to be complete by 2022.

Ring roads hasten the flow of traffic around some of the world’s biggest cities. The Boulevard Périphérique circumnavigates Paris, and rings feature prominently from Melbourne, Australia to Lahore, Pakistan. The terminology often differs – Washington D.C.’s Capital Beltway harbours Inner and Outer Loops, and the London Orbital runs 188 kilometres. In Canada, Circle Drive in Saskatoon opened in 2013, while Highway 216 in Edmonton ranks as one of the busiest roadways in Western Canada. Partial rings include Autoroute 30, which circumnavigates southeastern Montreal, and the Regina Bypass, which rounds just a portion of the prairie city.

Calgary’s ring road, alternatively known as Stoney Trail and Highway 201, will still technically classify as “partial” even with the southwest expansion. However, the work will add 31 kilometres of mostly eight-lane expressway to the current ring road, provide connections to several east-west highways, and serve as a major north-south corridor for avoiding Calgary’s increasingly clogged arteries.

“The city’s growing pretty fast and there’s a need for more highways to ensure efficient movement of traffic,” says Rizwan Hussain, who oversees construction of major capital projects for Alberta Transportation. “This is part of the long-term transportation and economic corridor. It will enhance safety, support the economy and improve quality of life because people will be spending less time in traffic.”

Planning for the southwest component began in the 1970s, when the province started assembling land for a transportation utilities corridor (TUC). With development pushing outwards, the province approached the Tsuut’ina First Nation to negotiate for land.

“We were given only seven years from the date of the land transfer (2015) to hire a contractor and finish this road,” Hussain says. “If we fail to finish in seven years, the land will go back to the First Nation, all the money the province has given to them will remain with them, and whatever infrastructure we have built will also go to them.”

The $2.2-billion total projected cost includes project planning, real estate, utility relocation and a $1.42-billion contract with MVP. That contract, in turn, covers design, construction, 30 years of operation and maintenance and has MVP raising 40 per cent of project financing. The private sector financing will arrive first and cover design and construction. Once the project is complete, the province will make monthly payments to MVP for ongoing operations and maintenance. The federal government will also provide roughly $250 million in infrastructure funding.

To meet the tight deadline, proponents have taken pains to expedite activity, reduce costs and avoid conflict with adjacent landowners and nearby residents. Rather than trucking gravel from afar, crews are mining aggregate underneath the corridor and crushing it into useable gravel at two facilities on-site. “It means we’re not transporting gravel using hundreds of trucks every day,” Hussain says. Proponents have also located two asphalt plants within project boundaries.

To minimize noise from gravel and asphalt processing, proponents invested in low-noise mufflers and generators for the plants and opted against back-up alarms. As a result, Hussain says, noise levels average 50 decibels, well below the 65 dBA standard. To keep dust at bay, crews water gravel from the moment it’s mined using special spray nozzles as well as filtering screens. The asphalt operations run on natural gas, further reducing emissions and odours.

“Alberta Environment and Alberta Health are checking our gravel operations and we are well within the thresholds in the regulations,” Hussain says, noting that in the absence of provincial and federal standards for silica dust emissions, Alberta uses Ontario Ministry of Environment standards.

Environmentally sensitive areas have also proven challenging. Sections of the Elbow River and Fish Creek were relocated because the waterways happened to lie along the planned route. “We did it in stages,” Hussain explained. “We built the new channels first, then we blocked the old channels.” Crews transplanted 16,000 fish and worked to stabilize banks, prevent erosion and create suitable habitat for aquatic and shoreline vegetation.

Considerable attention is also being paid to flood mitigation and bridges are being designed to accommodate sudden storm surges and rapidly melting mountain snowpacks. “The 2013 flood was a significant event,” Hussain says. “We’ve done all the hydraulic modelling and we’ll be able to safely accommodate the flow of water underneath bridges.”

Another challenge arose from the corridor partly sitting on a former military base, with unexploded ordinance left behind from weapons testing. “It’s a huge risk for our contractors,” Hussain says, adding that the Department of National Defence and Alberta Transportation scoured the area and decommissioned numerous potentially lethal explosives, while the contractors have unearthed a few additional ones.

Generally though, the challenges have been routine. To manage traffic, proponents have designed detour routes that match the number of lanes displaced by adjacent road closures. With multiple contractors and a crew of 1,400 strong, it’s taken considerable effort to communicate effectively, build a coherent team and manage expectations. Nevertheless, Hussain sees the glass as half full. “When you have more contractors and more parties involved, there’s more opportunities to innovate, brainstorm and have a better product. We’re lucky to have experienced contractors and professionals working together to ensure safety, environmental protection and project quality.”

While the province bears overall responsibility, the City of Calgary is significantly involved as the central stakeholder. “We’re working closely with Alberta Transportation on all the interface issues we have with each other and to help them successfully deliver this project,” says Julie Radke, the City of Calgary’s manager of ring road integration and special projects.

Calgary isn’t contributing any funding towards the ring road itself because it’s built within the TUC and thus, under provincial authority. However, the city is funding connections and related integration, much of which is scheduled to open in advance of the ring road extension. “Our budget on that is $133 million,” Radke says, adding that the money is coming from Calgary’s capital infrastructure planning budget.

Some city work was completed even before crews began work on the southwest extension. One example is a pedestrian overpass at Anderson Road. “That was done so that not only can the pathway have a place to go while the construction is being done, but it will serve as the long-term link,” Radke says.

There’s also cooperation in other areas. While the province is overseeing traffic management, including detour designs and plans, Calgary’s transportation division provides ongoing feedback because city roads are involved.

It’s the same with utilities, drainage and flood-risk mitigation. “We’ve partnered with [Alberta Transportation] on a study review of river crossings,” Radke says. “The city did quite an involved study [in 2015] to review the Elbow River Bridge, to make sure what they were proposing was appropriate and satisfactory from a flooding and water quality perspective.”

While heavy machinery almost always hogs the spotlight at road-work sites, computer-driven digital technologies have been prominent both in project boardrooms and out in the field. In a written response to questions, Tim Rule, project director with KGL Constructors, says crews are using drones to take aerial photographs. “[It] allows us to plan material placement and reduce site congestion,” Rule says. “KGL can use photogrammetry techniques to get 3D pictures of the current ground and calculate quantities to plan effective earthwork operations.”

KGL has also equipped tablet computers with an app that lets team members see designers’ models in the field within a five-metre accuracy. “Those who have it set up can determine what is happening and where it’s happening with a few swipes of the finger,” Rule says. “This technology is also very useful for identifying existing utilities in an area of operations.”

With the project in full swing, all eyes are on the 2021 deadline and on what matters most in the end. While Alberta Transportation is driving the ring road’s construction, the benefits to Calgary are considerable. “It’s an important part of the good movement network for getting into and around the city,” Radke says. “We’ve been lacking a north-south connection along the west side of the city, and this provides it for us. It will form part of our skeletal road network system and will help move people around.”

Presuming all goes according to plan, Calgary’s Ring Road will be just nine kilometres shy of forming a full circle when 2021 draws to a close. However, the province has already paved the way for the route’s eventual completion. Just last month, Alberta earmarked the funds to pay for the final westernmost segment. The procurement process is expected to kick off shortly, while the province plans to fully complete its 101-kilometre ring by 2022.