Top pair from field of dealer-event winners will challenge for the Global Operator Challenge world title in Las Vega at CONEXPO-CON/AGG. 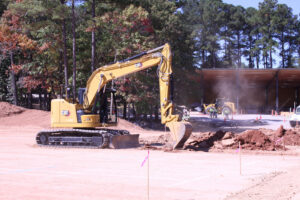 The crowning of the Cat Global Operator Challenge (GOC) champion is one step closer. North America’s eastern and western regional champions have been determined.

Thirty-five dealer event winners from across North America gathered in Clayton, N.C., to prove their mastery of both equipment and efficiency-boosting technology, with two emerging victorious and earning the right to advance to the final round in Las Vegas.

Besting the field in the eastern region semi-final, John Schiedeck of Schiedeck Construction in Texas, and representing dealer Holt Cat, finished the three GOC events in an overall time of 25:30.

“When I was in the seat, I had to calm myself. Six minutes in the backhoe seemed like 30,” commented Schiedeck. “I’m humbled and blessed to be able to win this in front of my family.”

“I think every little boy always dreamed of digging trenches and digging holes. So, I grew up doing that,” explained Ferris. “I feel very proud and excited and happy to move on to the next competition and see how we do there.”

Held on Caterpillar grounds at the Edward J. Rapp Customer & Training Center in Clayton, GOC officials divided the 35 best operators from Canada, the United States and Puerto Rico into eastern and western regions for the semi-final competitions. All competitors completed the same three events using Cat equipment and technology.

“Our challenge team went to great lengths to ensure a level playing field for all participants, so no one had an advantage,” said Matt Smith, global marketing manager for Caterpillar. “They even tarped the large excavator challenge area so the rain we had the night before the eastern semi-finals to ensure that didn’t affect any section of that challenge event.”

The “trench run” saw all operators use a Cat 315 excavator with Cat Grade with 2D technology to dig a 20-foot trench. Depth transitioned from two feet to one foot midway through the trench, which had marked areas with pipes that the operators had to avoid. “I like the excavator,” commented Ryan Totton of Gulf Operators in New Brunswick. The operator, who was representing Toromont Cat, added, “You can do almost anything with it.”

“Locked & Loaded” had operators maneuvering a Cat 950 wheel loader through an obstacle course where any slight deviation from the path resulted in the machine knocking balls off cones for costly time penalties. The operator then exchanged the bucket attachment used for loading material for a forklift attachment to pick up a sports utility vehicle.

Featuring the Cat 420 XE backhoe loader, the “Backhoe Bonanza” station tested operators’ machine mastery with multiple challenges. They first picked up an I-beam with the loader bucket, place it on a rack and then return it before maneuvering across a trench where they could not touch bungy cords without facing a penalty. Operators also maneuvered through cones with tennis balls, placed a square beam in a cylinder with the backhoe bucket and finally scooped up balls from pylons and deposited them inside an oil drum.

“When we set up the course and went through it with our own operators, we knew it was going to be tough, so we raise the time limit from 15 to 20 minutes due to the difficulty,” said Dustin Adams, marketing manager for small dozers and mini hydraulic excavators for Caterpillar. “Most completed the course in under 10 minutes and some under seven. That’s a testament to the quality of the competition.”

The regional GOC semi-finals were a culmination of months of competitions held worldwide at the dealer level.

“We experienced amazing participation in this year’s challenge,” said Jessica Nunley, global marketing manager for Caterpillar. “From more than 10,000 registrants, 3,500 machine operators competed in the first round at the dealer level, and only 84 of the best operators in the world made it to the regional semi-finals.”

In addition to the overall winners advancing to the finals, the following participants were recognized by Caterpillar with awards.

The GOC finals will take place during CONEXPO-CON/AGG inside Caterpillar’s 70,000 ft2 outdoor exhibit, F9127 in the Festival Lot.