Toronto’s unofficial symbol continues to be the crane 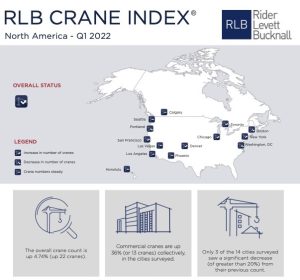 As it has since 2015, Toronto continues to lead the crane count in North America, according to the Rider Levett Bucknall Crane Index for North America. The city posted a 12 per cent increase in cranes across the city, even as project completions took away 18 cranes from the previous survey.

The commercial sector leads the change in the numbers, with an increase of 18 cranes. Residential and mixed-use projects also experienced growth, with a combined increase of seven cranes.

The other Canadian city in the index, Calgary, stayed consistent, losing only a single crane on its skyline. While the $634 million Calgary Event Centre has been put on hold because of concerns about cost escalation, the number of building permits is up 29 per cent year-over-year with residential projects driving the construction industry.

Across North America, the Q1 2022 survey reports a 4.5 per cent increase in cranes from the previous edition of the index. Of the fourteen cities surveyed: five experienced an increase; six are holding steady; and three have decreased.

The report authors say that they expect the crane count to remain steady, as many projects are experiencing delays in their schedules due to supply chain issues and construction costs continue to climb up, giving some developers hesitancy to break ground at this time.

Published twice each year, the Rider Levett Bucknall Crane Index tracks the number of operating tower cranes in 14 major cities across Canada and the U.S.