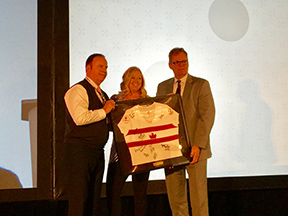 PCL Construction has been selected as the first recipient of the Outstanding Partner Award from Commonwealth Games Canada, at the Commonwealth Sport Summit.

The award was presented to PCL’s president, Western Canada, Kris Hildebrand at the Chateau Lacombe hotel in Edmonton during the 2016 Commonwealth Sport Summit.