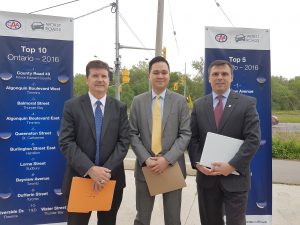 The technical analysis performed by member companies of Ontario Road Builders’ Association (ORBA) on the Top 10 Worst Roads in Ontario announced today, reaffirms the need for more investment in municipal infrastructure across the province.

As technical experts, 15 ORBA member companies inspected and verified the nominated roads in this year’s Worst Roads campaign. Consistent across the province, the inspections revealed that investments in road maintenance are needed with roads showing signs of potholes, pavement cracks, rutting along with poor traffic flow.

Annually, Canadian Automobile Association (CAA) compiles a list of the Top 10 Worst Roads in Ontario and now includes the top 5 worst roads in eight regions across the province. The regional lists of the worst roads create greater awareness of the poor state of local roads in Ontario municipalities.

“This year’s Worst Roads Campaign once again solidified that although much work has been done across the province to maintain and repair Ontario’s roads, greater investments are needed to tackle the staggering municipal infrastructure deficit in Ontario,” commented Geoff Wilkinson, ORBA’s executive director. “An efficient transportation system is essential for a vibrant economy and good quality of life – connecting our communities and enabling businesses to get their goods to market.”

This year County Road 49 in Prince Edward County has been named the worst road in Ontario. For more information on this year’s Top 10 Worst Roads in Ontario, visit orba.org/caa-worst-roads.