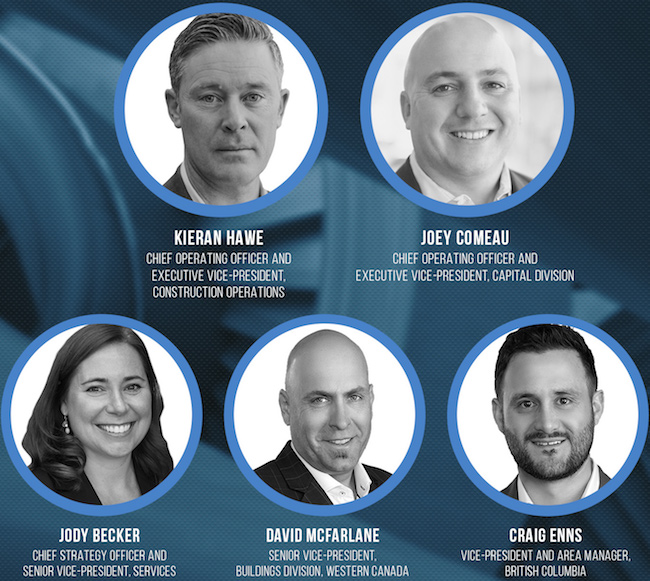 The Canadian contractor said May 15 that Kieran Hawe, who has overseen the company’s Canadian Building division as executive vice-president since 2016, has been appointed chief operating officer and executive vice-president of EllisDon construction operations. The unit is responsible for the company’s core Buildings, Civil and Industrial divisions that book annual revenues of more than $4 billion both in Canada and abroad. With a background in the mechanical and electrical field, Hawe joined EllisDon in 2000 and has since held numerous management roles.

Joey Comeau will take over the analogous role of COO and executive vice-president within the company’s Capital division. With 15 years of experience investing in a range of asset classes, Comeau joined the EllisDon ranks in 2014. In the new role he will be responsible for the builder’s diversification into new geographic areas, as well as new sectors, such as private sector equity partnerships and real estate development.

The role of EllisDon’s current chief strategy officer, Jody Becker, is also expanding. The company said Becker has been appointed senior vice-president of Services, taking responsibility for “the growth of EllisDon as a high-performance building operator, maintenance provider and technology integrator.” Becker, who originally joined the company as a counsel in 2007, will oversee the operations of Facilities Services, Energy & Digital Services, Project Management, Furniture, Equipment & Design, and Sustainable Building Solutions in her expanded role.

Finally, the company is shaking up its leadership in Western Canada. David McFarlane, currently the vice-president and area manager for the Pacific region, has been appointed senior vice-president of EllisDon’s Western Canada Buildings division. He will be tasked with overseeing the Vancouver, Edmonton and Calgary area offices. The company has appointed Craig Enns, currently a construction manager, to fill the position left vacant by McFarlane.