‘Down to the studs’: Huge restoration of Parliament’s Centre Block to cost up to $5B 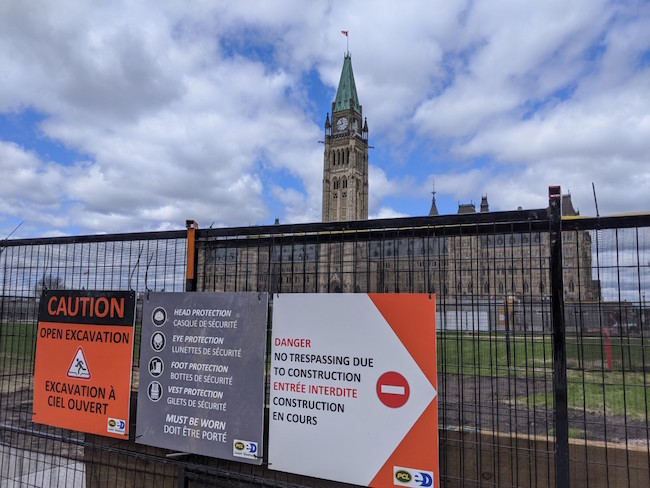 OTTAWA—The massive restoration project underway at Parliament’s Centre Block will cost up to $5 billion and continue at least until 2030, federal officials say.

Construction on the traditional seat of the House of Commons and Senate is expected to wrap before 2032, with a cost of between $4.5 billion and $5 billion, Public Services and Procurement Canada said June 18 in a release.

The iconic sandstone edifice that sits atop Parliament Hill has seen no major upgrades since its completion in 1927 and is “showing its age both inside and out,” said Procurement Minister Anita Anand.

She highlighted the building’s symbolic significance as well as the practical urgency of repairs.

“It is a national icon that needs to be protected so that it can continue to serve our parliamentary democracy into the next century. But more than that, it is a building for all Canadians,” she said, stressing its role as a venue for major events, visits from international leaders “and even the occasional protest.”

Lawmakers, who have been legislating out of West Block since 2019, won’t return to their usual neo-Gothic digs until testing on chambers and committee rooms is completed post-construction.

Centre Block, which includes the chiming Peace Tower, is now cloaked in scaffolding and bookended by a pair of cranes as work ramps up on what officials describe as “the largest and most complex heritage rehabilitation” in Canadian history.

Workers have already excavated some 40,000 truckloads of Canadian Shield to be recycled in construction building materials, Anand said. They’ve detected about nine million kilograms of asbestos, removing half of it from the building so far. They plan to extract about one-third of the nearly 400,000 stones that line the exterior, with the goal of repairing or in some cases replacing them.

“Much of the building has now been taken down to the studs,” Rob Wright, an assistant deputy minister in the Procurement Department, told reporters at a technical briefing.

The project includes a new welcome centre that will house a permanent display of the Charter of Rights and Freedoms, which is currently languishing in storage, Anand said.

Meanwhile, upgrades to windows, roofs, mechanical and electrical systems and information technology make up part of the effort to modernize Centre Block to 21st-century standards of energy efficiency and accessibility.

New heating and cooling technology as well as enclosed courtyards will transform one of the government’s “worst greenhouse gas-emitting buildings to a carbon-neutral facility,” Wright said.

The overhaul also aims to beef up Parliament’s broadcasting and video-conferencing capabilities, whose importance has been underscored during the COVID-19 pandemic.

Wright said that “the challenge of forecasting escalation (of costs) in the current pandemic context” forms part of the reason for the restoration’s broad project estimate of $4.5 billion to $5 billion — the welcome centre included — as supply chain disruption pushes up prices.

“We have elevated rates right now. We anticipate that they will go down,” he said.

The decade-long makeover will create 70,000 jobs across the country, including the 1,500-plus construction workers expected on-site daily in the coming years, the department said.

Asked whether officials would consider restoring the crumbling 24 Sussex Drive — traditional home to the sitting prime minister, but uninhabited since 2015 due to its state of disrepair — Anand said renovation decisions around any of the capital’s six official residences rest with a Crown corporation that is run by an arm’s-length board.