December permits well ahead of 2020 figures

Despite small dip from November, overall permit values finish the year on a high note. 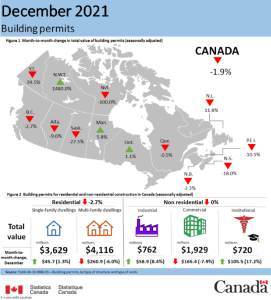 On the residential side, values were up 19 per cent compared to a year earlier, including a 22.1 per cent bump in multi-family residential, although overall residential figures slid 2.7 per cent on a month-to-month basis thanks to a six per cent fall from the November report.

The December 2021 non-residential permits were also much higher than December 2020, 21.7 per cent higher, in fact, although the $3.4 billion valuation left the sector flat compared to November of 2021.

The total value of commercial permits fell 7.9 per cent to $1.9 billion in December. Most of the decline came from Alberta’s 55.6 per cent drop, reflecting the BMO Centre permit issued the previous month.

Construction intentions in the industrial sector rose 8.4 per cent to $762 million. A $46 million aluminium mining building renovation permit in Quebec was a notable contributor to the component.

The value of institutional building permits increased more than 17 per cent, to $720 million.

The total value of building permits in the fourth quarter of 2021 jumped more than 10 per cent to reach a new high of $33.1 billion. This surpassed the previous record of $31.5 billion set in the first quarter of 2021.

Overall in 2021, the value of building permits surged 25.6 per cent to $126.5 billion, the strongest annual growth ever recorded. However, material price and labour cost increases in the construction industry accounted for almost two-thirds of the increase.

Construction intentions in the multi-family sector hit a record high for the year, rising 21.1 per cent to $46.5 billion.

The non-residential sector was up more than 17 per cent in 2021, reaching $39.6 billion, and continuing its recovery to 2019 levels. Only the institutional component exceeded pre-pandemic levels, while the commercial and industrial components were both roughly eight per cent below 2019 totals.