Cost-sharing agreement in place to twin Highway 40 in Alberta 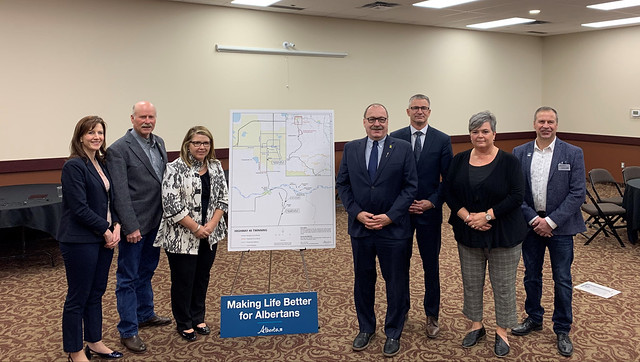 The Alberta government, the Municipal District of Greenview and County of Grande Prairie have reached a cost-sharing agreement to twin a portion of Highway 40.

The cost-sharing deal will kick-start early construction activities, such as the relocation of utilities and land clearing, and will twin 19 kilometres of Highway 40, from Grande Prairie to just south of the Norbord Wood Panel Plant.

The project also includes a second bridge across the Wapiti River with a pedestrian walkway, several bridge structure and intersection improvements, upgrades to existing LEDs and a median vehicle inspection station to aide in safety oversight of the commercial trucking industry.

“Our focus in Transportation is on maintaining our existing highways instead of building new ones, but projects like twinning Highway 40 are important for economic development and job creation,” Ric McIver, Alberta’s Minister of Transportation, said in a release. “We need to think creatively about how to fund projects like this if we want them to move forward quickly. The MD of Greenview and County of Grande Prairie’s agreement to cost-share means that Highway 40 moves off the unfunded project list and into the capital plan, accelerating construction to start this year.”

Traffic volume on Highway 40 has increased by approximately 70 per cent over the past five years with an estimated 10,000 vehicles travelling the segment of Highway 40 from Grande Prairie to the Norbord Wood Power Plant every day. This stretch of the highway also sees double the amount of heavy truck traffic (30 per cent) compared to the provincial average (15 per cent).

The Government of Alberta does not release cost estimates on projects until a contract is awarded. The release notes that similar projects would typically cost between $100 and $120 million. Construction on the twinning project is slated to begin as early as summer 2020.