This year's five bauma Innovation Awards winners were revealed on Sunday ahead of this week's bauma trade show in Munich, Germany. 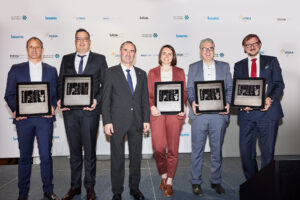 From a field of more than 130 entries, five companies were ultimately recognized as winners for technological achievement as the 2022 bauma Innovation Awards competition kicked off the trade show’s celebrations in Munich, Germany. Awards were presented in five categories: climate protection; digitalisation; mechanical engineering; construction; and research.

Among the winners was The R 9XX H2 from Liebherr, the company’s first hydrogen-powered crawler excavator. The prototype, which was developed by Liebherr-France SAS, is powered by an H966 hydrogen combustion engine produced at Liebherr Machines Bulle SA, the Liebherr Group’s engine competence centre in the Swiss canton of Fribourg.

When used on a construction site, a hydrogen excavator emits almost no CO2, and even when considering the environmental impact from production to decommissioning, the company says that this machine’s CO2 emissions are 70 per cent lower than those of comparable conventionally powered excavators.

Additional winners included Machines in Construction MiC 4.0 in the digitalisation category; Herrenknecht AG in the mechanical engineering competition; Holcim (Germany) GmbH in the construction division; and Freiberg University of Mining and Technology Mechanical Engineering Institute in the research category.