Construction growth being impacted by longer lead times and higher costs in 2022. 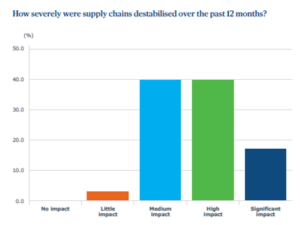 This year, the ICMS found longer lead times to be the most significant challenge, with most ballooning by more than 5 weeks in the past 12 months. (Graph courtesy of Turner & Townsend)

A review of Canada’s construction sector from Turner & Townsend put a spotlight on growth in Canada’s construction industry. Citing figures collected by Ireland-based Research and Markets for its International Construction Market Survey 2022 (ICMS), the professional services company shared that Canada’s annual growth registered at 6.1 per cent in real terms in 2021 and that the 2022 figures were expected to grow by another four per cent by year’s end. Residential construction has been growing fast, with condominiums and apartments  up 13 per cent year-on-year and new houses up 18 per cent.  Commercial construction was also on the rise, growing by 9.4 per cent year-on-year.

The researchers report that several global events have put pressure on supply chains in 2022, including the ongoing conflict in Ukraine and continued lockdowns in China. This reduced capacity has dealt a major shock to commodity markets and exacerbated the impact on an already stretched resource pool. The situation was further worsened by higher energy costs and several natural disasters, which have added to the pandemic’s lingering effects on the construction industry, adding to cost, timelines and ultimately testing the resilience of the economy, the authors state.

In addition, Canadian markets have faced labour shortages further adding to capacity constraints. Globally this was the third major construction challenge for 2022. New socio-cultural trends, such as the so-called “great resignation” and the “great retirement”, have driven the tightening of the labour pool around the world, not just in Canada. To address these challenges, organizations are now becoming more creative to attract new talent including forming strong relationships with sector bodies and training organizations, such as local universities or colleges.

The survey also showed how the economy has shifted, with the top performing sector in 2022 being industrial manufacturing and distribution. The strength of this industry came from healthy growth in buoyant manufacturing, particularly in pharmaceuticals and advanced manufacturing, and e-commerce. The next strongest segments were residential and social housing, and transportation.

In Canada, the federal government has placed more than $1 billion in investments in the advancement of industrial research and development of vaccines, which assisted in the growth of the manufacturing sector. Large warehouse investments from a diverse group that include the government, e-commerce players and investment funds, are also factoring into growth.

As interest in net-zero has been rising, it added to the ranking of key challenges in this year’s survey, where it ended up ranking 12th overall. Associated costs and limited resources may make it difficult to achieve set targets, but with Canada’s 2030 emission and 2050 net-zero goals, many companies are already starting to create and prioritize their net-zero strategies.