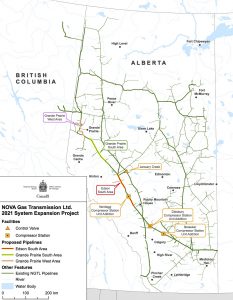 A map of the expansion to the NGTL system. Click to enlarge. PHOTO: National Energy Board

CALGARY—The Alberta government says it welcomes the news that Ottawa has approved an expansion of the Nova Gas Transmission Ltd. gathering system in Alberta — while condemning federal delays that it says cost this summer’s construction season.

“Despite months of delay, we are pleased the federal government has approved this key infrastructure project, which will create significant economic benefits and good jobs for Albertans, at a time they are needed the most,” said Alberta Energy Minister Sonya Savage Oct. 20.

The $2.3-billion NGTL expansion was approved by the government as part of a “commitment to moving forward with good projects,” said federal Natural Resources Minister Seamus O’Regan in a news release late Monday.

The federal government strengthened five conditions proposed by the Canada Energy Regulator and added one new condition, he added, with the changes aimed at better addressing Indigenous rights and mitigating construction impacts on caribou habitat.

The pipeline division owned by Calgary-based TC Energy Corp. will now be required to restore 3,840 hectares of caribou habitat, an area 30 times the size of the habitat impacted by the project, he said, and an Indigenous working group is to be formed to assist with the restoration and monitoring plan.

TC Energy said in a statement it is awaiting the details of the federal conditions but expects the approval will allow it to go ahead with construction, starting with compressor station field work next month and pipeline construction activities inJanuary.

“This capacity is vital to our customers, our industry and to the people who rely on the energy we deliver,” said Tracy Robinson, TC’s president of Canadian Natural Gas Pipelines and Coastal GasLink.

“We estimate this project will create up to 5,500 well-paying construction jobs for both Indigenous and non-Indigenous workers and will bring a much-needed economic boost to communities across Canada, especially in Alberta.”

The company says the new pipeline capacity will be placed in service through 2021 and 2022, adding the project is a “critical component” of the current $9.9-billion NGTL infrastructure program which will add 3.5 billion cubic feet per day of capacity between 2020 and 2024.

The federal approval allows the addition of 344 kilometres of new pipeline to the existing system from west of Red Deer in central Alberta to near Grande Prairie in the northwestern part of the province.

The NGTL system currently includes 25,000 kilometres of pipeline in Alberta and northeastern British Columbia, connected to other systems to deliver gas across North America.