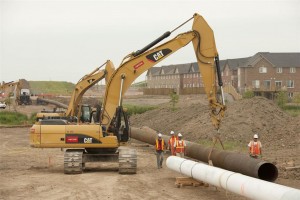 Aecon crews working on the Milton replacement Phase 2B, which involves the installation of approximately 1,500 metres of 26-in. steel and 1,500m of 34-in. steel gas main in Milton. Ont.

Construction company Aecon Group Inc. says it has received two regulatory permissions needed for it to be sold to a Chinese state-owned company for $1.5 billion.

The deal with CCCC International Holding Ltd., however, still faces a review under the Investment Canada Act.

Aecon says it has received a “no action” letter granting approval under the Canadian Competition Act and it has been advised by the buyer that it has approval from the National Development and Reform Commission, a Chinese economic planning regulator.

It says both approvals were required for closing of the deal announced in October.

Shareholders in the 140-year-old firm, which has worked on Canadian landmarks including the CN Tower, Vancouver’s SkyTrain and the Halifax Shipyard, are to vote on the sale in Toronto on Dec. 19.

Canada’s construction sector up ‘for sale’ as Aecon looks for bidder
No need for national security review of Aecon takeover, China’s ambassador says
Aecon Group to be acquired by CCCI for $20.37 per share