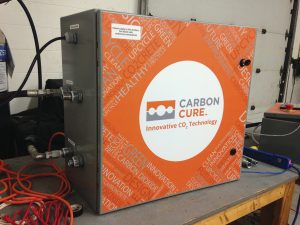 OTTAWA – Canadians will benefit from a new innovation that reduces carbon dioxide emissions, conserves fresh water and leads to greener buildings as a result of a $510,000 investment by the Government of Canada. This investment will foster innovation in carbon sequestering technology that captures carbon dioxide and encases this harmful greenhouse gas permanently in concrete.

This investment in CarbonCure, a clean technology company based in Dartmouth, NS, will lead to well-paying middle-class jobs and new business opportunities for Canadians. It will also lead to cleaner technologies that result in less air pollution and healthier communities.

The announcement was made June 30th by Darren Fisher, Member of Parliament for Dartmouth-Cole Harbour, on behalf of the Honourable Navdeep Bains, Minister of Innovation, Science and Economic Development.

The funding will support CarbonCure’s efforts to reduce the amount of carbon dioxide that is released into the environment during the process of producing concrete used to construct buildings. The company has developed a technology that traps and stores carbon dioxide emissions inside concrete. The concrete is then used to retrofit buildings. CarbonCure’s technology results in stronger concrete that turns a harmful greenhouse gas into an ingredient for a value-added commodity.

“CarbonCure’s technology captures carbon dioxide emissions from industrial pollution. And then, through a chemical reaction, those waste greenhouse gases are recycled back into the process for producing concrete. This technology makes stronger concrete with a lower carbon footprint. It has the potential to create well-paying middle-class jobs in Dartmouth and equip Nova Scotians with the skills they need for a fast-growing, globally competitive economy based on clean technology,” said Darren Fisher, Member of Parliament for Dartmouth-Cole Harbour.

This project is being funded through Sustainable Development Technology Canada, which works with Canadian companies to bring early-stage clean technologies to market.

Investments in clean technology are part of the Government’s Innovation and Skills Plan, a multi-year strategy to create well-paying jobs for the middle class and those working hard to join it.