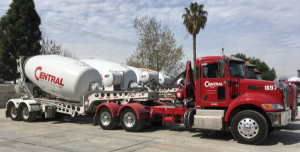 CarbonCure’s technology ties in perfectly with Canada’s vision of promoting innovative, scalable clean technologies with export potential. The 2017 Canadian federal budget has prioritized the growth of clean technology companies like CarbonCure. “The world is moving towards cleaner technologies; I am proud that innovative Canadian entrepreneurs like CarbonCure are expanding internationally, creating jobs and putting Canadian know-how on the map in major markets like California,” said Minister McKenna.

With support from the Canadian federal government, and leading multinational partners like The Linde Group, CarbonCure is leading the formation of this new carbon utilization industry. Carbon utilization technologies, such as CarbonCure’s, can help the world transition to a low-carbon economy today. In the future, such technologies could open up new markets worth $1 trillion, and reduce global greenhouse gas emissions by up to 15 per cent by the year 2030 (Source: Global CO2 Initiative, 2017).

CarbonCure’s technology is unique in that it reduces greenhouse gases, while also providing significant economic benefits to concrete producers. The technology is currently installed in nearly 50 concrete plants across North America. CarbonCure’s retrofit technology sources carbon dioxide emissions from local industrial emitters, and converts the greenhouse gas into nano-sized minerals to make concrete stronger and greener. These production and environmental benefits provide producers a competitive advantage to better meet the changing needs of customers while transitioning to a low-carbon future.

Carbon dioxide supplied to Central Concrete is sourced from a nearby CO2 capture plant of The Linde Group, a multinational industrial gases and engineering company. Linde is pleased to partner with CarbonCure to supply carbon dioxide to its California-based concrete producers.

As further evidence of the growing interest in carbon capture and utilization, the international $20 million NRG COSIA Carbon XPRIZE competition was launched last year. CarbonCure is among 27 semi-finalist teams, of which nine are Canadian, to demonstrate that their technology is the most cost-effective, highest-impact and most scalable solution to convert carbon dioxide (CO2) into high-value products. The competition runs over the next four-years, with the final round of demonstrations occurring in Alberta.

CarbonCure’s retrofit technology chemically sequesters waste carbon dioxide during the concrete manufacturing process to make greener and stronger concrete. CarbonCure is part of a growing industry of CO2-utilization technologies that are expected to reduce global greenhouse gas emissions by 15% by 2030. CarbonCure’s technology is currently operational in a growing number of concrete plants across North America, including several of the world’s largest vertically-integrated cement and concrete companies. CarbonCure is one of 27 semi-finalists in the $20 million NRG COSIA Carbon XPRIZE challenge, which has been called the Nobel prize for climate technologies. For more information, visit: www.carboncure.com.

Central Concrete, a business unit of U.S. Concrete Inc. has been serving the San Francisco Bay Area for more than 60 years. Our ready-mix company is recognized for engineering higher-performing concrete with a lower carbon footprint. Today, nearly 75% of Central Concrete’s mixes are low carbon mixes, used across all project sizes and types. Some award winning projects include: the California Academy of Sciences (one of the largest public LEED platinum-rated buildings in the world and the world’s greenest museum), NASA Sustainability Base (LEED platinum; one of the “greenest” federal buildings in the United States), the San Francisco Public Utilities Commission Headquarters (LEED platinum; 2013: named “greenest office building in the United States”) and the San Francisco 49ers Levi’s Stadium (first NFL stadium to achieve LEED Gold certification). The impact of Central Concrete’s mixes is significant – for example, Central Concrete’s low carbon concrete mixes reduced the carbon footprint of the San Francisco 49ers Levi’s Stadium by 23 million pounds. For more information, visit: www.centralconcrete.com.

About The Linde Group

In the 2016 financial year, The Linde Group generated revenue of EUR 16.948 bn (USD 17.9 bn), making it one of the leading gases and engineering companies in the world, with approximately 60,000 employees working in more than 100 countries worldwide. The strategy of The Linde Group is geared towards long-term profitable growth and focuses on the expansion of its international business, with forward-looking products and services. Linde acts responsibly towards its shareholders, business partners, employees, society and the environment in every one of its business areas, regions and locations across the globe. The company is committed to technologies and products that unite the goals of customer value and sustainable development. For more information, visit: www.linde.com.