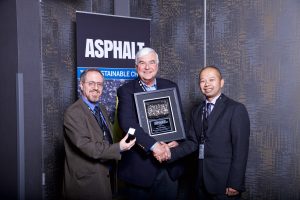 Hosted December 1st at the Universal Eventspace Conference and Event Centre in Vaughan, Ont., these awards recognize the best of the best in the production of asphalt. Recipients met exceptionally high standards in seven categories:

The nine newly awarded plants are:

Asphalt plants named for the three-year Trillium recertification, were:

“Being good neighbours and stewards of the environment is a top priority for OHMPA producer members and the Trillium Award recognizes those plants that go above and beyond the “gold” standard already required by industry regulations,” said OHMPA executive director Vince Aurilio. “We are very pleased that this year we have awarded and re-certified a record number of plants. To date, 77 plants have earned the Trillium Award and 61 have been re-certified. That speaks highly of our members and Ontario’s asphalt industry.”

Also presented at the seminar was the Bleeds Black Award, which recognizes individuals who have demonstrated exceptional commitment and passion to the continual improvement of asphalt throughout their career. The 2016 Bleeds Black Award recipient is Tom Dziedziejko, Director of Quality, Infrastructure for Aecon Construction and Materials Limited. He has worked for Aecon for 20 years and has been in the asphalt industry for more than 30 years working in materials testing and construction. Throughout the decades Dziedziejko has made a tremendous impact within the industry through his work and advocacy on numerous committees and task groups and has been a great mentor to the next generation of asphalt technologists.

The inception of this award is credited to a past OHMPA director who in 2012 described an individual and said, “his passion and commitment for all things asphalt is so great that when cut, he bleeds black.”

OHMPA congratulates this year’s award winners and heartily thanks them for their passion and commitment to quality asphalt pavements.