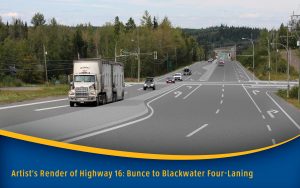 On Oct. 28, the governments of Canada and British Columbia announced that $24 million in funding has been appointed to expand a 3.4 kilometre stretch of Highway 16 from two lanes to four. The highway expansion – from Bunce Road to east of Jensen Road – will improve safety by providing safe passing opportunities and increase efficiency through reduced congestion. Upgrades will also be made to the intersections at Bunce and Gauthier Road, Sykes and Blackwater Road, and Buckingham and Haldi Lake Road.

The Government of Canada is providing up to $10,126,180 to this project through the Provincial-Territorial Infrastructure Component—National and Regional Projects (PTIC-NRP). The Province of British Columbia (B.C.) is providing the remaining $13,983,162. The total estimated cost of the project is $24,109,342.

“When this four-laning is completed, it will increase the safety and capacity of Highway 16 for those travelling to and from B.C.’s northwest and for those who rely on this corridor for their commute. The project will not only extend the existing four-laning of Highway 16, it will also upgrade a number of intersections, significantly improving safety at those locations,” said Todd Stone, B.C. Minister of Transportation and Infrastructure.

“On behalf of Council, I would like to extend my appreciation to the Province of B.C. and the Government of Canada for this vital investment in the safety of motorists and pedestrians along this busy corridor, which is a critical entrance into Prince George. We are also extremely pleased to be adding to this project by installing a long-awaited sidewalk and new street lighting near Vanway Elementary School. The City will also be constructing a water main to improve water pressure in the neighbourhood and additional street lighting, traffic signals, and intersection improvements. Council has long known of the concerns of residents about this stretch of highway and we are very pleased to be a part of this major announcement,” said Lyn Hall, Mayor of Prince George.

TransCanada Highway getting safety improvements near Malahat, BC