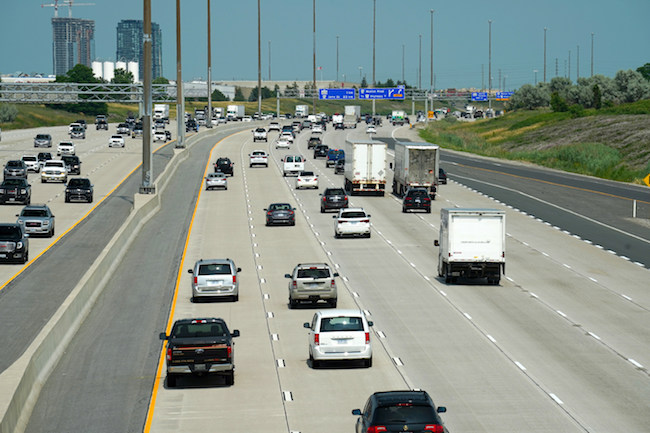 Selling its stake in the Toronto area toll road will help the Montreal-based company pay off hundreds of millions in debt. PHOTO: 407 ETR Concession Company Ltd.

MONTREAL—A judge has cleared SNC-Lavalin Group Inc. to proceed with the $3.25-billion sale of a stake in Ontario’s 407 toll highway to the Canada Pension Plan Investment Board (CPPIB), paving the way for the beleaguered company to pay off hundreds of millions in debt.

The ruling jumpstarted SNC-Lavalin shares Aug. 7, which rose 99 cents, or six per cent, to close at $17.35, halting a week-long slide that brought the stock to 15-year lows following a year that saw the firm’s market value fall by more than two-thirds to $2.87 billion.

In a decision Friday, the Ontario Superior Court greenlighted the pension board’s purchase of a 10-per-cent stake in 407 International Inc., dismissing a legal challenge from Cintra Global S.E., one of the toll roads current owners.

SNC-Lavalin said that even if the decision were reversed on appeal, Cintra and the pension board have agreed the transaction would not. In that scenario, Cintra and the CPPIB would adjust the number of shares between them.

SNC-Lavalin management confirmed last week it plans to put the proceeds toward debt repayment, including a $600-million payment on a loan from the Caisse, Quebec’s pension fund manager. SNC-Lavalin will retain a 6.8 per cent slice of the toll road, which yields consistent dividends and carries long-term potential in the traffic-clogged Greater Toronto Area.

About $3 billion from the sale is payable at the closing date and $250 million over the next 10 years, according to SNC-Lavalin. It expects the deal to close within the month.

In April, the Montreal-based company unveiled a deal to sell part of its 16.8 per cent stake in Ontario’s 407 highway to the Ontario Municipal Employees Retirement System (OMERS). The announcement spawned a legal battle between Cintra and the CPPIB, which each claimed a right of first refusal on the OMERS agreement based on their respective ownership stakes of 43.2 per cent and 40 per cent in the toll road.

SNC cancelled that deal in May, paying an $81-million break fee to OMERS and stating that the CPPIB was entitled to match the bid.

On Friday, Justice Glenn Hainey wrote that OMERS’ proposed purchase of SNC shares was “solely as a financial investor,” citing an agreement Cintra signed in 2002 to waive its right of first refusal in deals involving purchasers that do not have competing interests — except as financial investors — in areas such as construction or road projects.

Cintra — a subsidiary of Spanish multinational Ferrovial S.A. — had claimed OMERS is a competitor and does not fall within the waiver’s exception for financial investors. The Ontario pension fund company holds a 65 per cent interest in the corporation that manages the Confederation Bridge toll road and made up part of the consortia on various road projects including B.C.’s Sea to Sky Highway.

Analyst Derek Spronck of RBC Dominion Securities framed the pending sale to the CPPIB “positively…as it improves visibility around the timeliness of the company’s deleveraging plans.”

Highway 407 was privatized under former premier Mike Harris’s Progressive Conservative government in 1998, when SNC-Lavalin scooped up an initial 22.6 per cent stake.