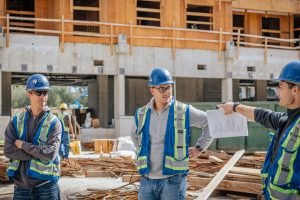 “People are our x-factor,” says Jerry Pol, business development manager at Caliber Projects during a discussion about the traits, values and culture that landed his company in the top spot on On-Site’s Top 5 Companies with Under 50 Employees for a second straight year.

Compiled as part of On-Site’s Top Contractors in Canada special feature, the list gives due to the small to medium-sized companies who are, as Pol likes to put it, “crushing it” on their projects.

For Caliber Projects, its focus is primarily on mixed-use, multi-family and master-planned communities in B.C.’s Fraser Valley region. “We are building various multi-building six-storey projects, constructed out of concrete and wood-frame,” explains Pol. “as well as pure concrete mid-rises – we like to call them towers, but they are eight to 10 storeys. And there is concrete high-rise on the horizon.”

With the company crossing the 50-employee threshold in early 2022, it will not be present on the list for a third consecutive year next year, but Pol and the company’s chief financial officer, Zack Staples, are not as concerned about rankings as they are about the company’s projects and the people they work with – both their clients and their employees.

“What makes us different is how Caliber engages its employees in all aspects of the employee-employer relationship,” says Staples. 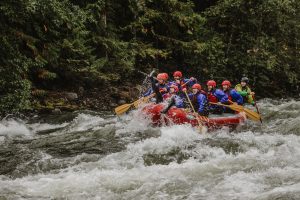 “We want to be awesome, and that means being huge in living out our culture, but we don’t want to be a giant, 250-person company,” explains Pol. “We are trying to stay in what we call the sweet spot of production.”

Staying in that spot and being open with its team about the company and its goals, has allowed Caliber to foster a spirit of communication and comradery that has facilitated the considerable growth in project volumes over the past year, say the pair. And that growth trend is expected to continue as the next sets of large projects come into range between now and 2024.

“We believe that our people are the best in the business,” says Pol, explaining that the leadership team calls the members of its project teams their A-Players. “There’s profit and efficiency opportunities that we will be able to capitalize on because of the nature of the people that we have working at Caliber Projects.”

“We have a standard communication rhythm, starting with daily huddles within the small teams, and weekly touch points to meet with departments,” he says. “All meetings include a relational element.”

The weekly meetings are where participants celebrate any wins or successes and share good news about the company, as well as about their employees and their families. “That’s a really important part of our culture,” he explains.

The meetings also provide opportunities for the company to be nimble by soliciting feedback from staff who are on their jobsites every day.

“Feedback loops are an important part of a small organization like Caliber,” says Staples. “One of the advantages of being small is the ability to pivot quite quickly, but if you want to act quickly, you need to have strong feedback loops that allow you to do so.”

“People support what they help create,” explains Pol. “One of our core values is ‘Own it!’ People will own it if you involve them.”

Involvement is not just for the team at Caliber. It also extends to the company’s customers as well.

“No different from how we engage with our employees, it has to work in the other direction as well, with our clients, the owners or developers,” explains Staples. “Heavy engagement and frequent communication is necessary. We have large, complex projects that we are supporting, and our clients are depending on us to execute these projects with as few surprises as possible, in a dynamic environment rife with change. The only way to combat the uncertainty is to have frequent conversations with key stakeholders.”

The ability to have those kinds of conversations also stems from Caliber’s process of selecting which projects to take on and which developers to work with in any given year. The company holds quarterly and annual strategy meetings with wide representation from its team where upcoming opportunities are presented and discussed in detail before the next targets are set.

“High involvement in strategic planning; that’s an awesome part of how Caliber makes decisions that affects the greater company and the employees,” says Staples. “We each have the opportunity to express feedback, and collectively we make a decision about what we are going to do. It’s really a collaborative effort.”

By encouraging different perspectives, and the desire to “own it,” Caliber Projects is empowering their people since, as Staples explains, “ultimately the success or failure of these plans lies in the hands of those doing the work.”

“Our goals might look different than other companies. We prioritize work-life balance. Go home on time as much as possible. Hang out with your kids. Have your family become part of the Caliber family. It’s about culture and being a great place to work,” says Pol. “Our People have been our x-factor through a pandemic, through accelerated inflation and supply chain shortages; it’s all about our A-Players and their families. We love building people and the processes that allow them to succeed.”

Adds Staples, “There’s lots to celebrate. We’ve got something very special, and we want to ensure that our attention is in the right place, and it all comes back to the men and women who continue to push Caliber onwards and upwards.”