The right mobile crane for the job 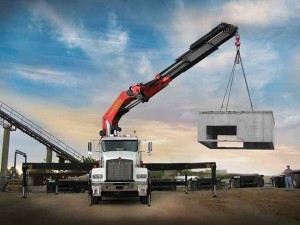 Events on both sides of the 49th parallel bode well for the mobile crane business. President Obama is poised to sign into law Congress’s five-year, $305-billion highway bill. Further north Prime Minister Trudeau is trying to figure out how to spend more than $100 billion in capital on infrastructure over the next decade. Are crane manufacturers relieved and maybe just a little bit excited? You bet.

Brian Smoot, project manager at Link-Belt Construction Equipment Co. says last year was grim. Contractors sat on the fence, preferring to rent rather than buy, while crane rental agencies themselves sat pat on existing fleets instead of buying new. “Since the highway bill’s been passed, we’re seeing a lot more interest in the pickers, and companies actually willing to spend the money.”

Rob MacGregor, owner of MacGregor Crane Service Ltd. in Cornwall, Ont., is a little more circumspect of new business coming from increased infrastructure spending. “It depends if any of that money comes our way or not.” Cornwall, after all, is not Toronto or Vancouver. “All we try to do is keep the right sizes and styles of cranes on site.”

This could be the key to Link-Belt’s continued success in Canada. MacGregor’s biggest cranes are 90-tonne Link-Belt terrain cranes “that travel down the highway with 250 ft. of boom on them at 60 mph.” That’s a far cry from the older days when a truck crane maxed out at 0 or 45 mph. “These days we’re down the highway to a job site in one hour instead of two… It also enables [us] to take jobs father away.” 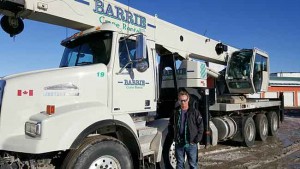 So where’s the work for Link-Belt in North America? Freeway construction, says Pat Collins, Link-Belt’s director of product marketing. “You see these poured-in-place pillars for overpasses, and all those forms have to be put up. We see a ton of that kind of work.” Link-Belt’s 65-tonne SANY SRC865 and 65-tonne Telescopic Boom Rough Terrain cranes represent the starting point for this kind of work, right up to the 100-tonne capacity machines.

“Those elevated freeways are a lot of what pickers do. It’s not big glamorous stuff, but it’s the day-to-day stuff. The bigger stuff goes to a lot of plant work where long booms are needed.”

Key to those bigger jobs are Link-Belt’s auxiliary swing-around-fly and jib for extended boom length. But more and more Link-Belt’s mid- and full-sized mobile cranes are also relying on telematics, remote cameras and a brand new feature, says Collins—outrigger lighting. “We have a lighting package in the carrier in new cranes where we light the entire extended outrigger beam and jack area.”

“When I started twelve years ago, my first truck was a twelve and a half-tonne boom National on a Ford truck with 45 ft. of boom, says Mike Barrie.” More capacity and boom length since then has been great, says the owner of Barrie Crane Rentals in Williamsburg, Ont. But something he and other crane rental agencies aren’t crazy about is the increasing complexity of on-board electronics.

“It’s a real pain on a job site with a load when the thing starts acting up and you have no idea what it’s doing or why it’s doing it. It could shut you off. Maybe the winch won’t work. Or the boom haul won’t come in or go out.”

“Very seldom is it a mechanical issue,” adds MacGregor. “If you have something stopping your crane it will be an electronics hitch somewhere, which is very frustrating `cause the average guy just can’t fix it.”

“As soon as you have electronics problem you’re toast, “says Glenn Sorensen at Maxum Crane Rentals in Burnaby B.C. “The electronics are needed, but no one knows how to fix them.” 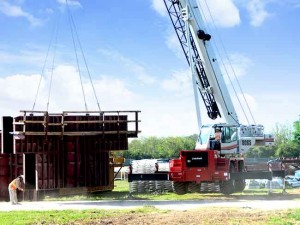 Justin Pilgrim, global product director at The Manitowoc Company says he hears similar complaints, and believes part of the problem maybe that the mobile crane industry was late to the electronics game. He admits some operators still reminisce about older machines “you could fix with a wrench and a hammer.” Short of an override in today’s operator cab, the usual remedy is a call to the dealer to send out a technician.

Manufactures will tell you they’re ‘hamstrung’ by the regulators; who are driven by safety considerations. “The load moment indicator is one [feature] that has to be on a crane now,” says Jamie Harthoorn, associate marketing manager for Terex Cranes. “And so at least from a manufacturer’s perspective there are reasons that [cranes] can’t do as much on the job site. Because we can’t have them overriding those safety systems.”

Mandatory outrigger position sensors may not stop an operator who’s determined to cheat, adds Terex’s chief engineer Mark Nielsen, “but now he’s got electronic feedback that tells him `Hey, you’re not set up properly to make this lift. You shouldn’t do it.’” Nielsen says he understands why a small minority of operators might cheat given the constraints they’re under. “Maybe they get away with it nine times out of
ten, but that tenth time something
bad happens.”

The word from both Nielsen and Manitowoc’s Justin Pilgrim: All manufacturers can do is try to source reliable components and use best practices for electrical routing and other areas of the machine.

The mainstay for National, just as it had been for years for Mike Barrie, is a much simpler mobile crane—the 26-tonne National 900A boom truck series with a 26-tonne 90-ft. main boom, plus up to 25 ft. and 45 ft. jib. “Frankly we haven’t done much with it because it has been so successful,” says Pilgrim. “It’s a bullet-proof machine for any kind of commercial or residential construction.”

Comparable in size is Terex’s 28-tonne BT 28106, a workhorse with a main boom of 106 ft. and maximum boom length of 153 ft. And as much as rental agencies say they want to retain the simplicity of the older machines they continue to insist on increased payload capacity and boom length—“to reach as far, and as high as they possibly can,” says Nielsen. “We’re constantly using better design techniques and more high-strength materials to keep the weight of the crane down so we can get it on to the road easily without special permits, and still have room to carry payload.” 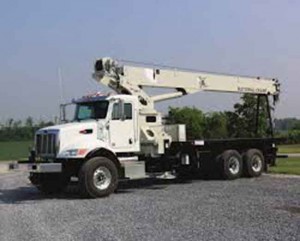 In fact, Terex’s family of boom trucks extends to its “crossover line,” a smaller capacity boom truck crane on its own chassis that extends all the way up to an 80-tonne capacity truck crane mounted on a commercial chassis. What makes the crossover different, “is what’s in between the sub-frame and outriggers,” says Nielsen. “We got rid of the torsion box; we put all the outriggers emanating right from the centre structure, so there’s no more torsion. This design enables us to use high-strength steels and still keep it light, but without the outrigger lift that makes operators feel uncomfortable.”

Not to be outdone, Manitowoc has introduced one size up from its 26-tonne 900A series – the NBT30H-2. This is a 30-tonne boom truck with a four-section 110-ft. boom. Its most important feature: Dual “H” style outriggers said to offer excellent stability and allow full-span, mid-span and retracted-span lifting capabilities.

“Industries that use telescopic cranes are realizing that the same work can be achieved with knuckle boom cranes and are becoming more aware of the product advantages.” Greg Sneed, product manager for Palfinger’s Articulating Cranes’ division in Niagara Falls, says decades ago knuckle boom cranes were never considered a good fit for North America’s heavy construction sector. All that began to change in the 1970s when European manufacturers decided they could compete head on with telescopic truck boom cranes.  “Now the smaller size knuckle boom cranes have virtually taken over the telescopic crane market, and we see that growth continuing in the larger cranes,” says Sneed.

Knuckle boom cranes are bigger, market awareness and acceptance
have expanded, and then there are what Sneed calls “the inherent advantages of knuckle boom cranes,” a folding, self-contained unit that allows you to carry a payload “with no height limitations.” Sneed says the mobile crane industry has also seen a dramatic increase in the use of radio remote controls on cranes as opposed to manual control levers.

“We attribute this to improvements in cost, and the reliability of remote control systems over the years. In addition, the remote control places the operator in the most ideal positions when operating
the crane.”

Darren Parr agrees. The Ontario sales manager for Atlas Polar represents HIAB. “Anything above nine stories you use a tower crane, anything below, you come to us,” says Parr. A lot of the work he has seen revolves around drywall where an articulated boom, he maintains, easily outmatches a boom truck. “While a stiff boom has a lot of reach it also has a lot of awkwardness because it has to reach out straight. You have to put it too far away from the building. It’s almost useless for that application.”

Like Palfinger’s PK 44502 High Performance heavy-duty crane, knuckle boom crane remote controls are pivotal on the HIAB 435K, the pride of Atlas Polar’s fleet, says Parr. “When you’re lifting dry wall nine stories and having someone pull it off into a window it better be precise.” With a lifting capacity of 280,200 ft.-lb. and a vertical reach of 92 ft., the remote control CombiDrive is complemented by the HIAB Valve 91, a closed centre, pressure-compensated and load-sensing control valve that provides the operator with a fingertip feel when controlling the crane.

So many smarts. So much capacity and reach. Are mobile crane manufacturers about to be rewarded for all their effort and innovation in federal infrastructure spending? Parr is cautiously optimistic. “I don’t think we’re going to see an instant spike, but eventually the trickle-down effect will occur and that will have a positive
effect on us.

David Godkin is a Toronto-based freelance writer and editor. Send comments to editor@on-sitemag.com