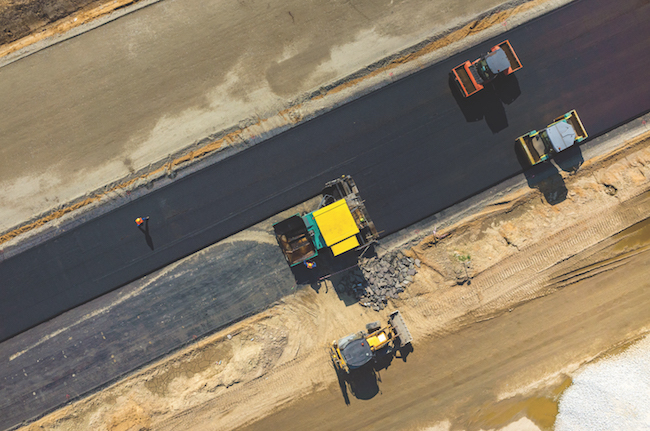 The infrastructure spending plan covers a huge number of projects across the country from road work to transit lines. PHOTO: Getty Images

It may have been a little slow off the proverbial mark, but the federal government’s $180 billion infrastructure plan is now off and running.

As of August 2018, the federal government has approved funding for thousands of projects across the country – from small-scale jobs worth as little as a few thousand dollars, to megaprojects with price tags running into the billions. By 2028, the Investing in Canada Plan is expected to have doled out more than $180 billion, split nearly evenly between investments in new programs and funding for existing federal initiatives.

Though some concerns remain about the flow of funds, Ottawa has made substantial progress over the past few months. Of the $14.4 billion promised under the first phase of the plan, 88 per cent has been tied to specific projects that are either underway or complete – up from 70 per cent in April. The larger, second tranche of $81 billion in new spending, which Ottawa announced in Budget 2017, has also begun to leave federal coffers.

14 federal departments and agencies, including Infrastructure Canada, Transport Canada and Natural Resources Canada are responsible for developing and overseeing the new spending programs.

For contractors, Infrastructure Canada’s $33 billion allotment that will pay for projects such as highways, water infrastructure and transit lines through bilateral agreements with each province and territory is likely the highest-stake initiative. Ottawa has struck deals to unlock this funding with 10 of the 13 jurisdictions, up from seven in April. Only agreements with Saskatchewan, Newfoundland and Labrador and Prince Edward Island remain unsigned. 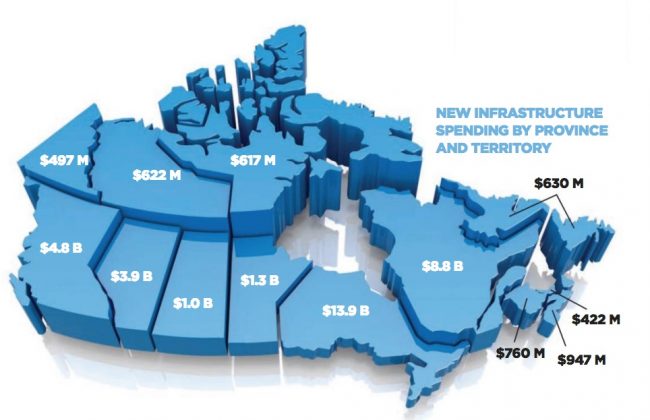 Despite the progress, there have been slow downs along the way.

“Our partners asked that we design programs that are flexible and responsive to their needs,” says former Infrastructure Minister Amarjeet Sohi, who was swapped off the infrastructure file in a mid-July cabinet shuffle. “And we have done just that – extending the deadlines under some of our programs and adjusting our forecasts under new programs to ensure that funding is available to their projects when they need it.”

One of the largest of these adjustments came this spring in Budget 2018. While Ottawa did not alter the $180 billion figure promised a year earlier, it pushed back billions in spending until the tail end of the 12-year plan.

The result is the slower rollout of funds between 2018 and 2024, but higher spending between 2025 and 2028. Backloading the budget delays an average of $441.6 million in spending in each of the next seven fiscal years when compared to the original plan. So, while spending is still expected to ramp up, it won’t be until 2025 that Ottawa truly opens the spigot. With the spring changes factored in, $36.1 billion – or 44.5 per cent of total new program spending – is earmarked for the final three fiscal years of the plan, bad news for contractors looking to secure new contracts today.

Mary Van Buren, the president of the Canadian Construction Association, acknowledged that there’s been “some slippage” in the flow of funds, but says as long as the infrastructure dollars remain on the federal books, it’s not cause for concern.

“The fact that there have been some delays is not great, but some of it is understandable,” she says, pointing to some municipal governments with projects that weren’t shovel-ready and capacity issues within the construction industry itself.

“Municipalities are working hard to get their funding requests in and there’s no shortage of work that needs to be done. Canada has very aging infrastructure – it’s very old. Whether that’s sewers or roads or bridges, these are important investments that need to be made,” she says, adding that the CCA is working with governments and industry groups at both the local and national level to help ensure any future funding problems are smoothed out and projects get underway.

Much of the federal infrastructure cash will reach construction firms through tried and true methods, such as provincial and municipal contracts or public private partnerships (P3s). But there’s at least one wildcard in Ottawa’s infrastructure deck.

The potential project, and others like it, would likely require close cooperation between Canada and its southern neighbour. Given the current climate, this seems far from guaranteed.

With fresh tariffs on steel and aluminum crossing the Canada-U.S. border, seemingly weekly threats of further hostile trade action from the Trump administration and some steep challenges within our own borders, many major building projects will be pressured in both the short- and long-term.
In the coming months, Van Buren expects the U.S. steel tariffs to inflict “some pain” on the construction industry, but if time drags on with no resolution, she anticipates a “real impact” on the industry.

“Our hope is of course that this is a short-term tactic on the U.S. side,” Van Buren says. “The jury’s still out on that, but we remain optimistic that the Canadian government… will come to a positive solution for Canada and the Americans are interested in doing that as well.”

According to the Canadian Coalition for Construction Steel, Canadian manufacturers produce only half the steel the Canadian construction industry consumes. The sector relies on the U.S. for about a quarter of its total demand. With tariffs increasing prices for buyers, budgets for infrastructure projects will need to keep pace. In other words, $180 billion will not go as far as it used to.

Van Buren says the higher prices could also cause problems for contractors that have entered into contracts with certain assumptions about material prices. The CCA is already working on mitigation should the international trade turmoil continue.

The Site C hydro project in British Columbia, for instance, was recently put through the wringer by its own government. It barely escaped cancellation, despite more than two years of construction. Several months later, the federal government spent $4.5 billion to purchase the Trans Mountain Pipeline from Kinder Morgan Canada Ltd. The deal safeguarded a project to expand the pipeline, which appeared increasingly uncertain due to opposition.

While both West Coast projects seem to be back on course, projects to build energy infrastructure like dams and pipelines face stronger opposition than ever. Still, so long as the work moves forward, contractors with expertise in the energy sector are poised for a busy few years as firms upgrade aging pipelines and build new routes to export Canadian oil and gas.

Along with the construction ramp-up on Trans Mountain, major pipeline operators Enbridge Inc. and TransCanada Corp. have committed billions to upgrading their systems within Canada over the next few years. Meanwhile, a consortium of energy heavyweights, including Shell, Petronas and PetroChina are inching toward green-lighting a $40 billion project to build a liquefied natural gas export terminal in Kitimat, B.C.

This article first appeared in the August 2018 issue of On-Site. You can check out the full issue here.
Print this page
Tweet