The evolution of machine control 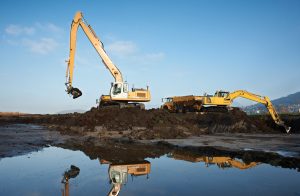 Earthworks companies have been using machine control technology on their equipment for roughly two decades. Such controls check grade, provide geographic coordinates, automate equipment functions and collect data, with the goal of boosting productivity, accuracy and the bottom-line.

Since their introduction, machine control systems have made huge strides, in technology, popularity and affordability.

“To look at the changes that have happened since the mid-90s you need only look at the differences in phones from that time to this,” says David Rowlett, U.S. manager, machine control division at Leica Geosystems (part of the Hexagon AB company).

“One of the big benefits [of GNSS] is you increase the number of satellites that your system can use. So, you have the improved ability to utilize satellite signals for your grading activity,” says Jeff Drake, business area manager for earth moving machine control systems at Trimble.

Rowlett explains “a broader mix of constellations reduces the risk of satellites not being available, and makes it easier to receive data in more demanding locations, next to buildings and treelines, and things of that nature.”

Sensor technology on machine control systems “has come leaps and bounds ahead of where it was. 3D wasn’t an option [two decades ago],” adds Kyle Birch, segment manager of Leica machine controls in Canada.

3D technology offers a much more detailed and accurate view of terrain for equipment operators.

Contractors are using machine control systems more broadly than in decades past.

“In the early days, this type of technology was predominately used on dozers and motor graders. Over the last 20 years we’ve seen the expansion of the technology onto additional machine types, for example excavators, wheel tractor scrapers, wheel loaders, asphalt pavers, concrete pavers and compactors,” says Drake.

“For just about any machine that needs precision and repeatability, we can adapt these technologies to it,” adds Rowlett.

Modern machine control systems also have on-board connectivity and receive data files from the office and send back performance information, on the amount of work done, material moved or added, etc. Progress on projects can be monitored in near real-time at headquarters.

Drones are another recent development. They can fly over construction sites, collecting data on ground conditions, machine positions, etc., which is then transmitted to field crews. 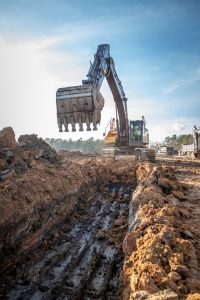 Bulldozers remain the most likely piece of earth moving gear to be equipped with a machine control system. Most of these dozers use the technology for “GPS grade control,” says Jamal Mohammed, sales manager at SITECH Mid-Canada, which distributes Trimble machine controls.

“The whole premise of GPS in your vehicle is to tell you where you are. It’s no different with a dozer. GPS information from satellites is telling the dozer where it is … it’s telling the operator where his blade is, where his blade needs to go,” explains Mohammed. “When he gets close to grade, he’s able to flip it into what we call automatic. The computer will take over the hydraulics and actually control the blade to get to grade.”

In Canada, highway construction firms are among the top adopters of machine control technology. “You would be very hard pressed to find a big highway project that doesn’t have 3D machine control running on [at least some machines],” says Birch.

Such companies “can’t afford a survey crew to stand there every day” and are looking to consolidate their workload and save money in the long run, he explains.

Still, the overall adoption rate of machine control technology remains low. Birch estimates “under five per cent” of existing earth moving equipment in Canada is equipped with machine control systems. This rises to maybe 10 per cent for brand new purchases, he adds.

The latter statistic reflects a growing trend that has seen machine-control makers and OEMs working together, to provide earth moving equipment with factory-built controls. Caterpillar, for example, has a partnership with Trimble for this purpose.

“You can order every major brand of bulldozer from the factory with systems on them today. Right now, it’s certain models but I think the day will come when every machine has this capability,” says Rowlett, noting the efficiencies of machine control systems are too great for equipment manufacturers to ignore.

If the increasing availability of factory-built controls is likely to spur adoption, lower cost is another enticement.

Early machine control systems were priced “around $200,000” for a single piece of equipment, says Mohammed. Drake puts the figure at “probably upwards of $150,000.”

Regardless of exact cost, machine control systems (which include support gear such as GPS bay stations, radio infrastructure and portable rovers “to establish the coordinate system that the machine will work in,” says Drake) were once very expensive.

Today, machine control systems vary in price “depending on the size of the project and number of machines you want to outfit, but if you were looking at a small site project, to outfit one machine with lower-cost bay stations, you could probably get [a system for under] $100,000 at this point,” states Drake.

While still a hefty investment, machine control technology can lead to big savings. 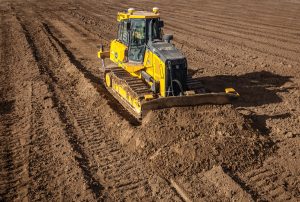 Save time and money

Instead of relying on traditional surveying methods, involving grade stakes marked for elevation and constant manual checking of grade, Amico opted for Leica’s MS50 MultiStation and SmartNet global positioning systems. While paving, a sonic sensor alerted operators if they needed to go lower or higher. The machine control systems saved time and money (fewer crews were needed for surveying and paving) while enhancing safety and grade check accuracy, says Leica.

Windley Contracting acquired Trimble’s GCS900 Grade Control System for a $40 million project to widen Highway 97 in British Columbia. According to Trimble, the system increased excavating productivity by 50 per cent, saved the company $2,500 a week in surveying costs and reduced staking expenses by 75 per cent.

Windley used a Trimble Internet Base Station Service (IBSS) consisting of a GNSS receiver, GNSS antenna, radio and a radio antenna to provide satellite positioning data. A 3D control system gave cab operators a detailed view of the site. Work began in 2011 and the expanded highway was opened to the public August 2013. 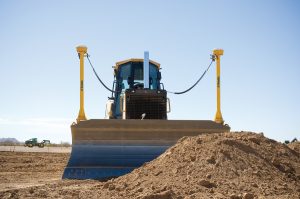 Over the next 20 years, expect to see machine control systems with better sensors, better data collection ability as well as more automation on more equipment. Lurking on the horizon are fully autonomous earth moving machines. The technology already exists, but isn’t common yet in construction circles.

“You see a lot more autonomous machines in the mining industry. In mining, if the worst happens and a machine runs amok, it’s probably just going to crash into a high wall and no major harm done,” says Rowlett. “Construction sites, however, are frequently in the middle of traffic or next to an elementary school … [that said] as we approach the day when we have autonomous cars on our streets and we build safety measures in them, I think you’ll see earth moving equipment be autonomous as well.”

No matter how advanced machine control technology gets, trained operators will still be a necessity.

“I often get asked, can I take anybody off the street and stick them in a machine now that I’ve got a blade that’s automated? The answer is ‘no’ because the operator knows a lot more than just where the blade needs to be and how to put it there,” says Rowlett. “They still have to know what material needs to be removed, where it needs to go, how it needs to get there. There’s still a lot of art to that.”