Thousands of trades students to benefit from scholarship campaign

Builders in Alberta have announced a $15 million investment campaign to fund scholarships for careers in construction. 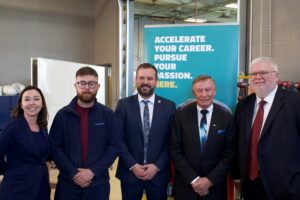 Facing a massive need for skilled tradespeople, an Alberta-based builder has initiated a $15-million campaign to fund trades training at Northern Alberta Institute of Technology (NAIT) and Southern Alberta Institute of Technology (SAIT). Jay Westman, chair and CEO of Jayman BUILT, is spearheading the campaign that will provide scholarships for construction-related trades at NAIT and SAIT.

This fall, Westman challenged industry peers and community leaders to match funds raised to establish the BILD Alberta Scholarships for Construction Careers initiative. Thanks to a $2 million donation from Westman and contributions from other leaders in the homebuilding community, including notable investments from Homes by Avi and Anthem Properties, that initiative has surpassed its initial $3 million goal, so Westman is upping the ante. With the funds committed now sitting at over $7 million, he recently announced that he will lead a further push aimed at growing the funds to $15 million.

“The shortage of skilled labour is the largest single issue our industry has ever faced,” stated Westman. “I have chosen to lead by example and lead this investment campaign to make a notable impact in overcoming the financial concerns of students, while also bolstering our industry’s much-needed construction capacity across Alberta. This is an Alberta initiative with an Alberta solution.”

Tuition for apprentice and diploma programs at the schools can surpass $5,000 for a four-year program, so the $15-million target could potentially fund 3,000 programs for apprenticeship and pre-employment students.

The awards will cover a wide range of construction careers, including carpentry, plumbing, sheet metal, electrician, bricklayer, cabinet maker, roofer, drywall, glazier, insulator and painter, for example, and will help workers on a pathway to their journeyperson certifications.

A portion of the funds will also be dedicated to engaging high school students and enhance skilled trades development in the province by building awareness of rewarding careers in the skilled trades.

“Careers in skilled trades provide important contributions to our communities and Alberta’s growing economy,” stated David Ross, president and CEO of SAIT. “Through this funding, SAIT students will have access to a scholarship program focused on building equity in the construction trades, and programming to engage with youth will foster an early interest in skilled trades.”

“Supporting student awards not only removes their financial barriers, but also gives them the help and encouragement to succeed and make a real difference in their chosen field,” added Laura Jo Gunter, president and CEO of NAIT.