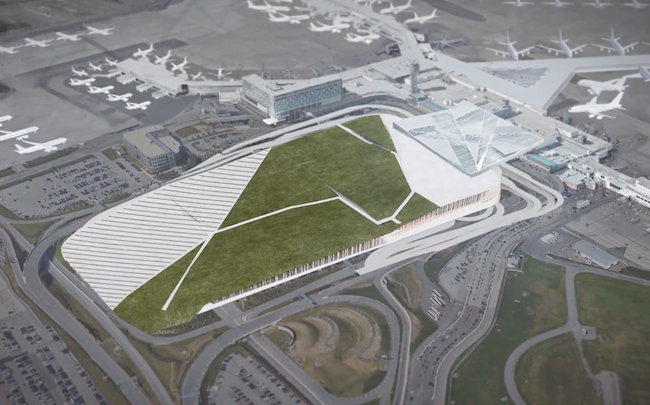 A rendering of the airport’s redeveloped passenger drop-off/pick-up zones and its parking complex with a new green roof. PHOTO: ADM/YouTube

MONTREAL—A consortium comprised of Pomerleau, SNC-Lavalin and Kiewit has won a construction management contract to stickhandle the early stages of a major infrastructure project at the Montreal-Trudeau International airport.

Aéroports de Montréal, which oversees the city’s two major airports, said May 15 that the three prominent contractors will take the lead on the Cityside development program at Montreal-Trudeau under an initial five-year contract. Under the terms of the deal, the PSK Construction team will manage the project’s design, assess constructability and look for ways to schedule and phase construction at the busy airport that moves about 20 million passengers a year.

“By using this innovative contract model of risk-based construction management, ADM will benefit from additional significant expertise for the implementation of this program, which will definitely change the face of YUL Montréal-Trudeau International airport,” Philippe Rainville, the airport authority’s president and CEO, said in a statement. “We are pleased to be working with companies that have solid expertise in carrying out projects of a similar scope.”

While the value of the construction management contract was not released, ADM plans to spend $2.5 billion on the overall Cityside project.

The development work targets mainly the airport’s access infrastructure. It aims to increase the number of ways passenger can get to the airport, as well as revamp existing areas.

Construction of an underground station to link the airport with the new Montreal light rail system (Réseau express métropolitain, or REM), which is currently being built, is one part of the project. The redevelopment of the current passenger drop-off/pick-up zones and the airport’s sprawling parking complex are two of the other major components.

Work on the Cityside project is expected to take place in stages over the next five to 10 years. At the same time, the airport is also planning a separate initiative to add a new terminal and improve its runways and taxiways.