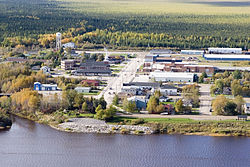 Ontario is providing the Town of Moosonee with up to $1.5 million to help replace water mains and sanitary sewer mains — part of the government’s expanded funding to help small, rural and northern communities build or repair critical infrastructure.

Premier Kathleen Wynne made the announcement August 11th, in Moosonee as part of a week-long trip to more than a dozen communities across the North. The investment is through the Ontario Community Infrastructure Fund (OCIF), which gives communities access to stable and predictable annual funding for roads, bridges, water and sewer systems, and other key infrastructure.

Moosonee is one of hundreds of municipalities across Ontario to have received support through OCIF. Since the government launched the fund in August 2014, it has supported 137 infrastructure projects through its application-based component, for a total investment of $174 million. And since January 2015, OCIF has provided grants to 425 municipalities through its formula-based component, for a total of $100 million. These investments are creating jobs and supporting local economic growth across the province.