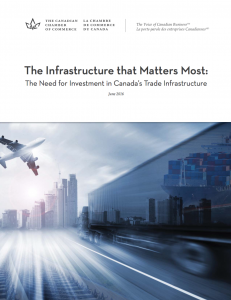 What follows is an argument for enhanced trade infrastructure investment, not simply as a “nice to have” when we get around to it but as a “must-have” before it is too late. It is a reminder of the fundamental connection of our economic well-being as a country to this category of transportation infrastructure that enables the movement of products, services and people to key markets around the world.

We look back now upon the construction of the St. Lawrence Seaway, our coast-to-coast national railway and the establishment of Canada’s national highway system as historic investments in nation building. Today, we are at the doorstep of a major new opportunity that can reshape our economic destiny. Across the globe, three billion new global middle class consumers are set to join our major trade partner to the south as customers of Canadian exports but only if our transportation network can enable the reliable delivery of the goods. Now is the time for a strategically focused and collaborative public-private upgrade of Canada’s key trade assets.

As the Canada Transportation Act Review suggests, investments in Canadian transportation infrastructure can drive our global competitiveness for the next 30 years. To read the full report: http://www.cca-acc.com/pdfs/en/information/Infrastructure.pdf