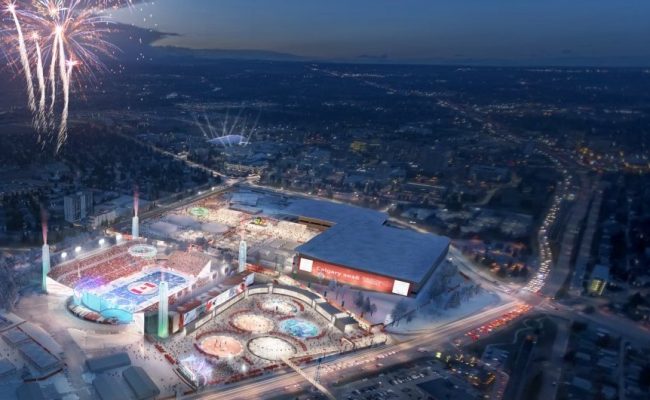 CALGARY—A Calgary bid for the 2026 Winter Olympic and Paralympic Games is destined to die after the majority of residents voted ‘no’ in a non-binding referendum.

In a plebiscite asking citizens if they want to host a Winter Games again after the 1988 Winter Olympics in the city, 56.4 per cent of those who went to the polls cast a dissenting vote Nov. 13.

The estimated $5.1 billion price tag to host the games would have seen the revitalization of eight existing sports facilities and construction a new mid-sized arena and fieldhouse.

“I believed in what the Olympic Games could do for our community, for our province and for our country,” bid corporation chair Scott Hutcheson said. “I’m disappointed in the outcome, but I certainly respect the democratic process.”

City council has the final say on whether Calgary proceeds with a bid, and the results won’t be declared official until Nov. 16. Council is expected to address the results Nov. 19, though a firm ‘no’ vote paves the way for a divided and nervous council to scuttle a bid.

“The provincial and federal funding will not be forthcoming with this decision today. I think it would be political suicide if they didn’t shut down this bid, so I expect we’ll be seeing that, hopefully,” said Daniel Gauld of the No Calgary Olympics organization.

Ten votes out of 15 on council were required Oct. 31 for a motion to pass on abandoning the plebiscite. Eight voted in favour of that motion which would have generated a cascade of other motions shutting down the bid.

Calgary mayor Naheed Nenshi voted for continuing with a bid, saying the proposed host draft plan and budget was a good deal for the city.

The Alberta government made its funding of a bid conditional on a plebiscite and provided $2 million to pay for it.

“Today was a success because Calgarians were given the opportunity to have their say on whether to proceed with an Olympic bid,” Alberta Minister of Culture and Recreation Ricardo Miranda said in a statement. “This decision was never an easy one. Calgarians were provided the information they needed to make an informed choice and we respect their decision.”

Calgary 2026, led by Mary Moran, who came from Calgary Economic Development, and Hutcheson, was hampered by the tardiness of what the cost-sharing agreement would be between the federal and provincial governments and the city.

An agreement that was supposed to be ready for public consumption mid-August wasn’t clear until Oct. 30.

“I have to work with city council every day and have for the last nine years and getting governments aligned is always a big challenge,” Moran said. “I wish we did it sooner, but we did the best we could with what we were dealt.”

“We always knew we had a short runway, but everybody knows we came out with a pretty solid budget on Sept. 11 and we always said a couple of numbers would change and they did. It’s just unfortunate it was complicated.”

In the more than $5 billion proposal, the public investment ask was $2.875 billion and down from an initial $3 billion.

The province committed $700 million, while the Canadian government said it would provide $1.45 billion.

The city of Calgary was asked for $390 million, and was credited with the $150 million already committed to improving an area that would be a games hub.

While no order of government offered to be a guarantor against debt, Calgary 2026 built $1.1 billion in contingency funds into its budget to mitigate financial risk.

“I think building a dream and articulating that with our social-media type of environment today and a populist movement makes it more challenging,” Hutcheson said.

The International Olympic Committee invited Calgary, Stockholm and a joint Italian bid from Milan and Cortina d’Ampezzo to be candidate cities for 2026.

The IOC will accept bids in early January. The election of the host city is in Lausanne, Switzerland, in June.

— Lauren Krugel contributed to this story.