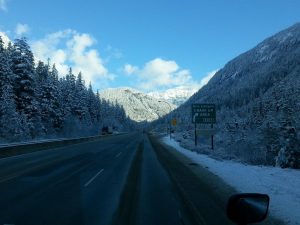 “I’d like to give thanks to the workers who contributed their time and talent towards the creation of this highway. Their hard work and dedication is a shining example of the skills and ingenuity this province is known for,” said Stone. “Today, the Coquihalla highway system links Kamloops, Kelowna and Merritt with the coast and has connected British Columbian communities along this route to opportunity for over three decades.”

Built on the former rail bed of the Kettle Valley Railroad, the first phase of the Coquihalla highway covers more than 120 kilometres and was completed on May 16, 1986, to coincide with Expo ’86 in Vancouver. More than 10,000 workers contributed to the building of this project through some of the most challenging terrain in the province. Starting in 1984, the entire project took two years to complete.

Today, the highway has over 20,000 vehicles per day and over four million per year. Phase 1 connected Hope to Merritt and was viewed as the largest and most difficult of the three phases. Phase 2 from Merritt to Kamloops was completed in September of 1987 and Phase 3 – the Okanagan Connector – which joined Merritt to Peachland – was completed in October 1990.

The Coquihalla highway will receive a significant improvement this year with expansion of the Box Canyon chain-up area. Funding from provincial and federal levels is now in place to expand the chain-up area to accommodate up to 70 commercial trucks, providing more space for commercial vehicles to chain up in the winter. The project will also see the construction of new washroom facilities, as well as additional parking and deceleration and acceleration lanes.

“The construction of the Coquihalla highway had a tremendous impact on communities like Hope and Merritt,” said MLA for Chilliwack-Hope Laurie Throness. “Thirty years later, this route is still one of the province’s most active corridors for the movement of goods and people, and vital to the Asia-Pacific Gateway. As our population grows and our economy thrives, it makes sense to continue to invest in this key trade route.”

“Phase 1 of the Coquihalla highway provided a faster alternative from Vancouver to the Interior, which opened up the region to tourism and trade,” said MLA for Fraser-Nicola Jackie Tegart. “As we look ahead and grow our economy, it is clear that improvements like the expansion of the Box Canyon chain-up area are necessary in order to increase the economic efficiency of our commercial trucking industry, but more importantly, to improve safety for those travelling along this corridor.”

Coquihalla Highway construction by the numbers: