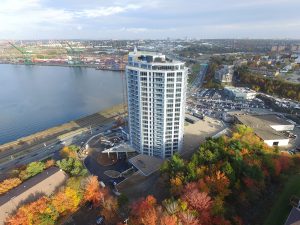 When PCL Construction needed to assess the condition of an Edmonton rooftop in mid-winter, they chose an alternative approach. “Instead of sending somebody up there to walk on the roof in icy conditions, we flew a UAV (unmanned aerial vehicle) over the roof and sent the video to the consultant,” says Mirra Maheden, senior virtual construction specialist for PCL. The video provided the necessary overview, and also allowed the consultant to zoom in on various details in order to complete the assessment.

UAV or drone adoption is one of the fastest growing uses of technology in construction, and inspecting icy rooftops is only one of many emerging applications leading to safer jobsites, better dissemination of information, and in some cases, precise measurement.

“We started looking into this about two years ago, and we’ve been using UAVs on project sites for about a year now,” says Sonny Shem, virtual construction manager for PCL. “It’s gone from discussing what we could do with drones, to actually getting out there and flying and capturing data.” PCL currently has a dozen pilots trained to fly drones effectively and in accordance with legal requirements.

The most common application, says Maheden, is relatively straightforward – progress videos, typically updated on a weekly basis, that give stakeholders a “big picture” view of how a job is progressing. “Videos allow managers to see the progress of the site from an aerial view, so they can assess which areas are progressing or lagging and compare that with their planning schedule. They can also send the video to clients, or prospective clients or tenants.”

Flight videos taken on drone flights are also used to identify hazards on jobsites, and to provide documentation for compliance with environmental regulations. “EllisDon does a lot of projects with local governments, and there are guidelines for maintaining clean jobsites and handling materials in an environmentally friendly way,” says Stantton Pallister, geomatics manager at Alberta-based PME Inc., a heavy civil contractor owned by EllisDon. “Drones allow us to keep a clear photographic record of the site.”

While providing viewers with an aerial perspective is the most common use for drones, it is not the only one. “Different kinds of cameras and devices can be attached to the drone for different applications,” says Pallister. “For example, when a building is complete, we can fly a drone around it with a thermal imaging camera, and look for heat leaks.” Other technologies include magnetic imaging, laser imaging, and GPS data.

Perhaps the most powerful application is the use of drone-collected data in virtual 3D models of construction projects. This provides a common view of the site for people throughout the organization, and allows supervisors, construction managers, and senior managers to discuss projects from the same vantage point. “The 3D models that are generated from our drone flights provide a perspective that amazes many of our customers, compared to what they are used to looking at,” says Pallister.

Drones can also be used for measurement purposes. One of the most advanced applications comes from mining: the use of drones in early stages of a project to create and update accurate geographic models, allowing contractors to measure quantities of earth, gravel, and other aggregates.

“At PME, one of the ways we get paid, is for how much earthworks material is moved at a jobsite, so we developed a process where we can use the drone to measure volumetric quantities of earthwork stockpiles on jobsites,” says Pallister. “We measure accurately to the cubic metre, and provide that to the construction team for progress billing.” The method, Pallister points out, is superior to traditional methods, such as counting truckloads. “We’re more accurate, and this adds up to substantial savings.”

Thanks to the introduction of drones to the consumer market, prices have plummeted in the past three years, giving contractors a range of choices. “We’re using everything from prosumer UAV to commercial devices – it depends on the application,” says Shen. “If we’re just taking a quick video, we might use a prosumer type drone. If we’re actually mapping the terrain, we’ll need a higher end drone with a better sensor and a better camera system.”

Collecting the data, however, is only the beginning. Captured data is typically stored in the drone on memory cards, and are then uploaded to the cloud, where it is either made available as video, or processed in formats suitable for BIM programs and other 3D apps. Integration, always a challenge, is particularly daunting given the file sizes, which ranges from 4 – 6 GB from a typical flight.

For organizations that aren’t interested in purchasing or learning to operate drones, there are companies like Menlo Park, Calif.-based technology provider Kespry, which offers an all-inclusive, end-to-end solution. Clients pay a subscription fee for a complete package, which includes access to fully-equipped drones, data collection tools, and cloud-based processing facilities that allow the data to be delivered to construction applications in 30 file formats. Kespry’s software flies the drones based on defined missions, so there is no need to train pilots.

“We take care of all the steps for contractors that need to collect accurate, reliable data, but don’t want to be in the drone business,” says David Shearer, vice-president marketing for Kespry. In addition to AEC (Architecture, Engineering, Construction), the company provides solutions for aggregates and mining, and the property claims insurance industry in Canada.

One of the key requirements for drone use is keeping compliant with regulations. UAVs were unregulated in Canada until fairly recently, but are now considered aircraft and are covered under the Canadian Aviation Regulations (CAR). Restrictions include allowable flying altitudes, maintaining visual contact with the drone, and avoidance of no-fly zones such as populated areas and airports.

The regulations are extensive, and operators at the very least need to become thoroughly familiar with them, and in many cases, apply for a Special Flight Operations Certificate (SFOC). “We have seen the regulations get very complicated,” says Shem. Organizations may be required to carry special liability insurance as well.

The rapid expansion of drone use in construction is not slowing down. PCL is working on expanding its capabilities for developing 3D point clouds for bringing data into its 3D modeling systems. “We’re just scratching the surface of where this can go,” says Maheden.

Pallister’s team is working on incorporating GIS data in their mapping operations. For example, PME plans to fly drones in built-up urban areas to identify and locate terrain features such as lamp posts, fire hydrants, mail boxes, and power lines – all of which are currently captured through ground observation. The information will then be shared with municipalities for urban planning, or to estimating teams. “When we’re looking at job pursuits or pre-construction work, we’ll be able to be more predictive for our planning and our costing,” says Pallister. “We’ll know what the ground features look like before we begin the project.”

Progress, however, isn’t just about improving the technology – contractors have much to gain from applying technologies that already exist. “It’s important that this is used in a wider perspective,” says Shem. “When you’re on a construction site, you don’t actually get to see the whole progress that’s taking place. We can show a progress video to a project manager that’s been on a site for two years, and they tell us they’ve never seen the project from that perspective.”

“When we share these videos with the trades on a project, they get to see things they don’t normally see,” says Maheden. “That helps them become more engaged and thus take pride in their own work, and helps us enhance the teamwork on site.”

Jacob Stoller is a principal of Toronto-based StollerStrategies. Send comments to editor@on-sitemag.com.