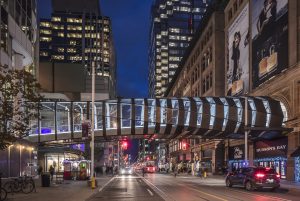 To integrate the Eaton Centre mall with Hudson’s Bay and Saks Fifth Avenue flagship locations in downtown Toronto, CF replaced the existing pedestrian bridge with a new connection above Queen Street, one of the city’s busiest streets.

Development involved a multi-phased process that required assembly adjacent to the shopping centre on James Street before being lifted into place.

The bridge was constructed and pre-assembled on the ground, which aimed to minimize impact to clients, neighbours, transit and tenants of the mall. 3D modelling and laser scanning were utilized in the project.

The original concept was to demolish the existing structure in sections and stick build the new bridge in its final position.

However, according to PCL, this concept posed negative impacts to business and transit, prompting the team to review alternate possibilities and concepts for consideration.

“It is an honour for PCL to accept the TCA’s Best of the Best Award in recognition of Cadillac Fairview’s investment in this iconic structure which has become a new cultural landmark for the City of Toronto,” said Matt Stainton, PCL Toronto senior construction manager. “This award is a testament to the collaborative relationships built between our team and multiple partners and stakeholders, coupled with a steadfast commitment to innovation, safety and limited disruption to business operations and the community.”