The traditional clipboard, and other rudimentary jobsite tools like it, are living on borrowed time 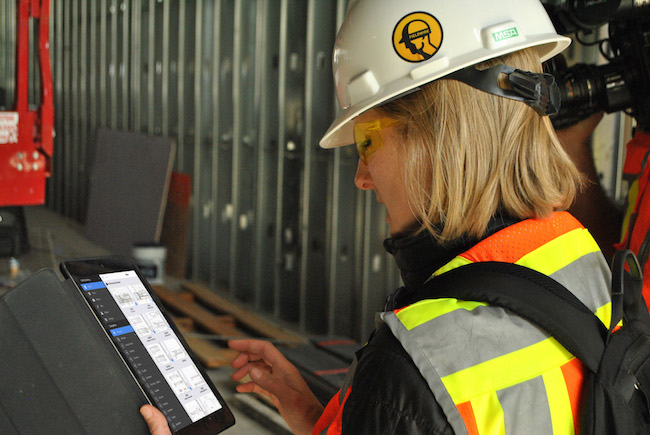 The technology enables builders to assign, track and review each stage of construction, as well as share this data with relevant stakeholders. PHOTO: Fieldwire

MISSISSAUGA, Ont.—The traditional clipboard, and other rudimentary jobsite tools like it, are living on borrowed time.

The Canadian contractor signed a new partnership to embed field management technology on each of its projects across the country August 27. The enterprise deal with California-based Fieldwire will link all EllisDon workers, clients, architects, consultants and other partners through a management platform that enables real-time information sharing, scheduling and job assigning.

“The construction industry is changing at a rapid pace. Leveraging technology allows us to further drive productivity at the project level,” said EllisDon Chief Technology Officer, Tom Strong. He added that Fieldwire will help the contractor’s project teams connect seamlessly with its clients and partners.

EllisDon has been using the software platform for about three years across hundreds of different job sites, including complex projects such as the Toronto-York Spadina Subway Extension and Calgary’s Brookfield Place.

Yves Frinault, Fieldwire’s CEO and co-founder, said the technology enables builders to assign, track and review each stage of construction, as well as share data collected with relevant stakeholders. It does it all without a cumbersome paper trail and costly face-to-face meetings.

Among other features, the Fieldwire app lets workers carry out inspections, set schedules, record as-builts and log photos and videos for verification. By tracking data and collecting it in one centralized hub, the platform saves significantly on time.

“If you think about it, it’s very simple,” Frinault said. “You have a foreman on-site and they have to run back to the trailer several times a day to ask a question to an engineer and then come back to their crew… That takes an insane amount of time if you’re working on a large hospital or a high-rise.”

Though the tech company says a precise return on investment is difficult to determine, customer surveys show taking advantage of the platform saves about an hour every day for each connected worker. With 30 per cent of the workers on any given job site plugged in—the average number, according to Fieldwire—savings on time add up quickly.

Along with EllisDon, Fieldwire pointed to Walsh Canada and B.C.-based Marcon as two other builders it’s working with in Canada. It also includes project owners such as Brookfield Asset Management Inc. and Morguard Corp. among its list of clients.

Because data collected throughout construction can be easily passed to the project owners when crews wrap up work, developers have a significant stake in the process.

For its part, Strong said EllisDon expects the freer flow of information to make its construction process more transparent.