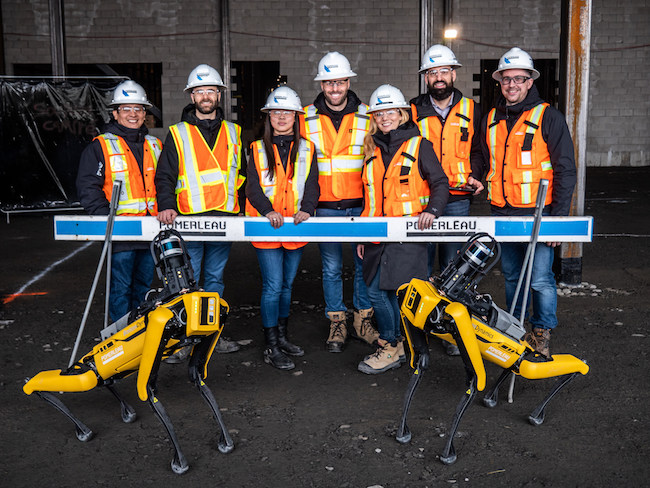 The innovation team at the Canadian contractor with a pair of the cutting-edge robots. PHOTO: Pomerleau Inc.

A construction project in Quebec has a unique new worker on-site.

Pomerleau Inc. said Jan. 29 it has deployed a cutting-edge robot known as ‘Spot’ near Montreal. It’s the first time the fully-automated robot has set out on assignment to an active job site anywhere in the world.

Ian Kirouac, the head of Transformation at Pomerleau, said the milestone will lead to collecting, integrating and making use of more accurate data. “Our industry is undergoing a profound transformation,” he said in a release. “We foresee robotics playing a large role in it.”

Spot, which is designed and built by prominent U.S. robotics firm Boston Dynamics, will take in the Montreal job site for six months. It’s equipped with an autonomous tracking system capable of avoiding people and other obstacles.

The battery-powered unit’s main purpose is to collect data. With a 360-degree camera strapped to its back, it will track progress on the job site using a software platform known as HoloBuilder to compare the real-world building process to virtual design plans. Pomerleau said adherence to budget, schedule and quality standards are a few of the metrics it will be watching most closely.

With the construction industry making strides to keep pace with the ever-evolving technology market, testing out the new robot is part of the Quebec-based contractor’s wider strategy.

“It’s becoming clear that today, we must turn to technology to assist and enhance human potential,” Eric Lessard, the company’s chief digital officer, said in a release. “Our approach is to try out different technologies — like Spot — to complement and help our workers, and then leverage their talent, skills and expertise for more crucial work.”

Pomerleau plans to assess Spot’s effectiveness and calculate the return on investment the robot offers over the next six months.