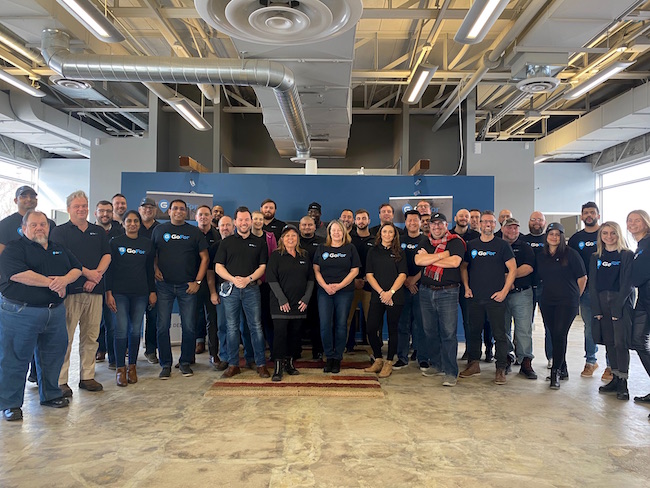 The Ottawa-based GoFor team. The company uses a model similar to Uber to connect retailers with drivers who truck material to job sites. PHOTO: GoFor

The Ottawa-based company announced June 17 it has closed a $9.8 million seed funding round that will allow it to continue adding cities in Canada and the U.S. to its network, as well launch a new SaaS (software as a service) offering known as GoFor Dispatch.

GoFor’s platform focuses primarily on connecting retailers with drivers who can truck materials the “final mile” to job sites. The system uses a model similar to Uber, allowing suppliers such as HD Supply, the Home Depot and Sherwin Williams to supplement their traditional fleets with owner/operators and quickly fill orders they would otherwise have had to push to later days. For contractors, the platform means staff can remain productive on-site instead of being sent on milk runs to pick up materials in short supply.

What GoFor’s drivers deliver runs the gamut — from a few gallons of paint to ABS piping and large, palletized goods. In turn, the type of vehicle used scales with the delivery. Currently, about 30 per cent of the company’s deliveries end up on large projects, while the bulk of its business it smaller scale homebuilding or renovation work.

The funding will help the company continue scaling up and capitalize on some of the momentum it’s gained during COVID-19.

“We have been focused on the full spectrum of efficient delivery systems and are grateful to help customers meet consumer demand during this global pandemic,” Brad Rollo, the company’s CEO, said in a release. “This modernization will ultimately help retailers move their business into the digital world to survive. Delivery was typically handled by expensive and inefficient fixed asset fleets — limiting their ability to scale to meet demand and service levels.”