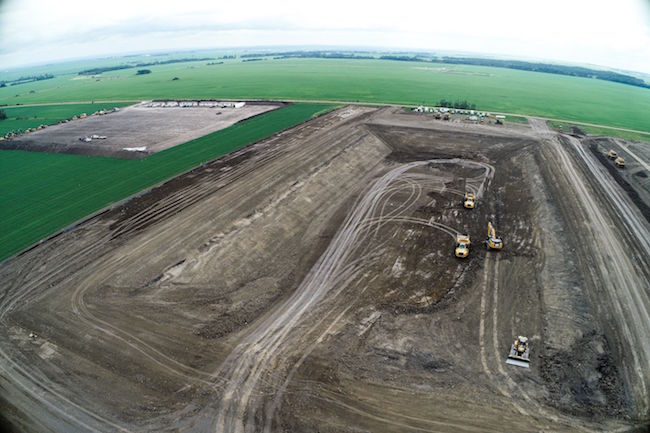 Eight 40-ton rock trucks, four dozers, a trio of excavators and a half dozen other pieces of iron isn’t the type of arsenal you typically associate with an engineering firm.

Calgary-based Integrated Sustainability doesn’t own the equipment, but for 12 weeks or so last summer, the company ran the machines to carve out a 103,000 cubic metre reservoir in Northern Alberta. It was the engineering firm’s first serious step into construction after a decade looking after design, quality control and at times, construction management.

“In the field, you’re consistently watching how you would like to do things differently, how you would plan to do things more efficiently,” said Integrated Sustainability’s president, Stuart Torr. “This innovation came from watching field construction inefficiencies for too long.”

Founded 10 years ago as a niche full-service engineering consulting firm — specializing mainly in water and waste projects in the energy sector — the expansion into construction gives the company full control over the projects it takes on. With clients looking for greater accountability, Torr said the turnkey approach was just a natural evolution of its business.

“We felt that we already took on the risk in many ways because we’re fully accountable for the engineering delivery that we do,” he said.

Advancements in equipment technology and a partnership with Cat dealer Finning Canada made the new approach possible, he added.

When Integrated Sustainability first touched base with Finning last year, the company’s move into construction was just a seed of an idea. Nathan Smith, rental manager at Finning Canada, said discussions about a basic rental quickly evolved into a complete package covering about 20 machines, fuel service, advanced GPS monitoring and equipment maintenance. With Integrated being an engineering company with no other machines or technicians on payroll, the service-oriented add-ons helped ease the transition to construction.

The technology, meanwhile, delivered the precision it was looking for.

“Most of the machines out on this site were advanced technology machines, equipped with sensors, GPS monitoring and payload systems,” Smith said. “It took operator error out of the equation, but it also allowed them real-time reporting to see, for example, how many cubic metres they moved that day, per asset.” 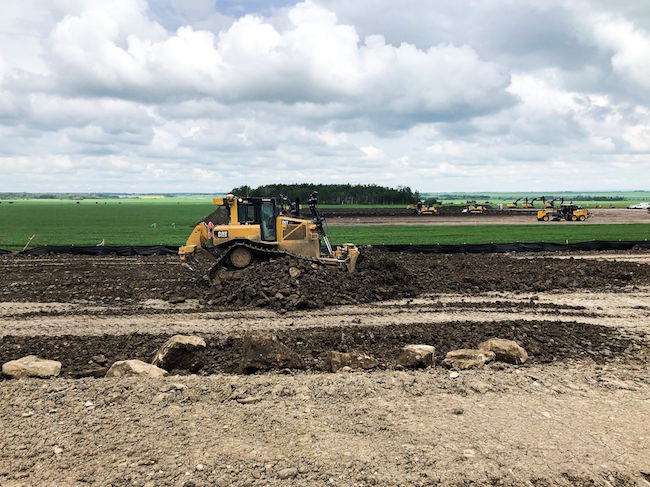 Gary Smolik, construction manager at Integrated Sustainability, said he was skeptical about the technology at first, but quickly came around when he saw what it was capable of.

“It allowed me to be on the site… sitting in my office in Calgary,” he said.

The job itself — for an undisclosed oil and gas firm — went off largely without a hitch. The first equipment arrived on-site in Wembley, Alta. in June and Integrated Sustainability handed over the finished reservoir, which was about half a kilometre square, in September.

“We blew through it,” Smolik said. “We had over like 36 centimetres of rain last summer and we still came in and finished the project ahead of schedule. On an earthworks job, rain is your worst enemy and usually shuts people down and your schedule gets drawn out.”

Working mainly out of the company’s command post in Calgary — and taking advantage of drone surveys and other real-time data streams from the equipment on-site — Smolik said he was able to get his operators precise details on exactly how much dirt needed to be moved, avoiding costly rework.

“When you say heavy equipment, you think big, bulky work, but you’re actually using heavy iron and working at a surgical level,” he said.

At times when productivity dipped, the steady stream of data could point to the problem.

“We were able to isolate problem operators, problem machines, underperforming machines, just by using the payload data,” Smith said. “And from there we were able to better manage the fleet. If you have an underperforming truck that isn’t hitting a cycle time, we could swap it out, or have a tech look at it and get it up to speed so their cycle times were back in order.”

Armed with a clear picture of what was going on, Smolik said the little things that typically go wrong on job sites simply never materialized. Ultimately, Integrated Sustainability was able to cap off the job and deliver the cost certainty its client was looking for. 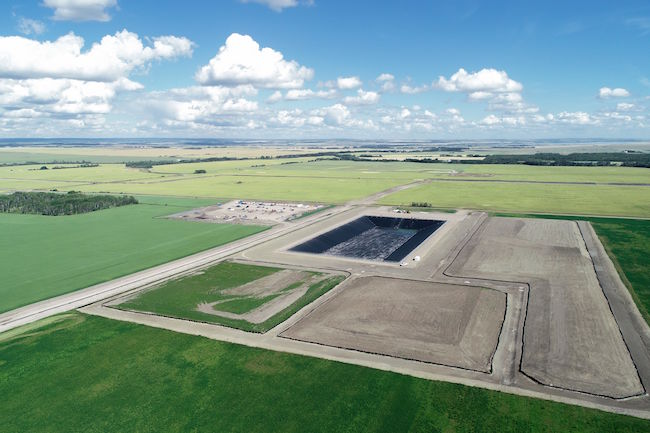 The freshwater reservoir in Wembley, Alta., built for an oil and gas firm. PHOTO: Finning Canada

Having completed the reservoir project, which served as something of a pilot for the new approach, Integrated Sustainability plans to move further into the design-build space.

It is taking on two such projects this year. One of them, it won in a public tender, which was also a first for the company. Torr said the team is confident the municipal win signals it has found a strong differentiator.

“I believe there’s probably a certain scale of job that there’s a perfect sweet spot for this — where it’s a little too big for the small operator but a little too small for the large operator,” Torr said. “This is where choosing the right equipment and developing the right methodology to drive greater efficiency will win.”

At Finning, Smith also anticipates the market is warming to this new approach.

Currently, equipment still requires an operator to be sitting in the cab. But as OEMs such as Cat build toward full autonomy, Smith anticipates design and construction will continue to merge closer together.

“If you want the construction work, you will eventually need to engineer it because the engineers are going to be able to , rent their 50 machines and press that button to autonomously complete the construction part of the job and mobilize the equipment themselves,” he said.

For this reason and others, Smith is bullish on the rental and leasing segments of the industry in the years ahead.

Integrated Sustainability’s approach is a case in point. If its shift toward construction continues, Torr said he could see the company moving to leasing as opposed to rental, but he can’t imagine ever buying outright. Along with eliminating the upfront expense, he pointed to Finning taking on the responsibility for maintaining the equipment and its ability to drive efficiencies through technology as key benefits of the rental arrangement.

“I wouldn’t be surprised if more companies look to this model as a default,” Torr said.