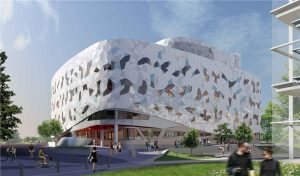 Bergeron Centre for Engineering Excellence at York University, artist’s rendering. The project won one of the CanBIM Awards presented in Toronto on October 5 and was a tour venue for the CanBIM conference.

The Canada BIM Council held its 2nd Technology Built Innovation event in Toronto on October 5 and 6. The first day was devoted to tours of two BIM-designed buildings at York University in the northwest of the city: the university’s subway station still under construction, and the recently completed  Bergeron Centre for Engineering Excellence, with its unusual patterned façade.

The second day saw a roster of speakers representing everyone from software manufacturers, to architects (Adamson Associates, to engineers (IBI and Arup). Naturally the speakers were all advocates and practitioners of the building information modelling (BIM) approach. BIM has been defined as “a digital representation of physical and functional characteristics of a facility.” The BIM model of a building ideally incorporates and integrates multi-disciplinary design layers in three dimensions as well as related functional and material information. The model can be used for collaborating in the building’s design and for operating the facility throughout its lifecycle.

To read the full story, go to: http://www.canadianconsultingengineer.com/buildings/canbim-keynote-speaker-envisions-futuristic-world-generative-design/1003403582/