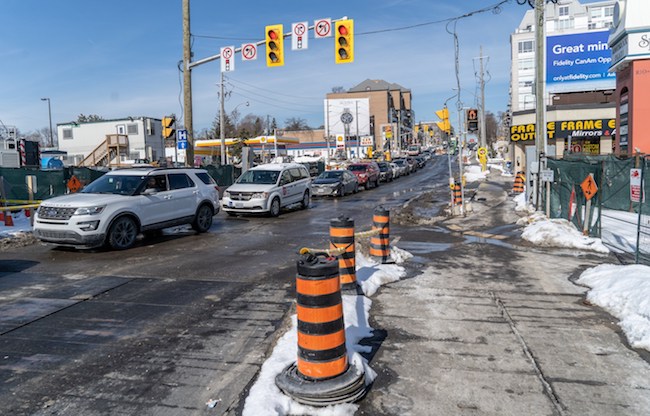 A view of the traffic-filled route on the east end of Toronto. CAA predicts some relief is on the way. PHOTO: CAA South Central Ontario

TORONTO—The voters have spoken… and there’s a new worst road in Ontario.

The Canadian Automobile Association released the results of its 2019 Worst Road competition May 30, singling out Toronto’s Eglinton Avenue East for the less than flattering title.

CAA said it’s the first time the route has climbed to the top of its annual list. Voters pointed to crumbling pavement, potholes, traffic congestion and poor signage as the main reasons for their frustration with the road.

Still, the “honour” may be short-lived.

“While the condition of Eglinton Avenue is of concern to the public, many of the challenges for all road users will hopefully be resolved with the completion of the Eglinton Crosstown project,” said Raymond Chan, government relations for CAA South Central Ontario. “The gridlock and congestion that many motorists are currently experiencing should ease as construction winds down, repairs to the road are made and as more people choose new transit options.”

Across Ontario, 53 per cent of municipalities had at least one road nominated for the competition. Votes are collected to identify the worst routes and the Ontario Road Builders’ Association (ORBA) steps in to verify the selections.

Here’s the complete list of Ontario’s Worst Roads for 2019: