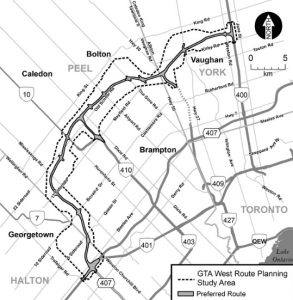 A map of the preferred route. Click to enlarge. PHOTO: Province of Ontario

Ontario has mapped out a preliminary route for a major new highway through the north end of the Greater Toronto Area.

Revived last year after being scrapped by the previous government, the greenfield highway would run southwest from Hwy. 400 in Vaughan, through Bolton, Caledon and Brampton, before turning south and terminating at the junction of Hwy. 401 and Hwy. 407, at the westernmost tip of Mississauga.

Any construction on the project remains several years away, but early plans for the route include up to six lanes, integrated transit with stations for passengers and truck parking.

“The Greater Golden Horseshoe is an economic driver for the province and addressing transportation needs in this region is essential to the competitiveness of our economy,” Caroline Mulroney, Ontario’s minister of Transportation, said in a release. “The GTA West Corridor will help alleviate traffic congestion and improve the movement of people and goods across the province.”

The preferred route for the new 400-series highway released Aug. 7 integrates feedback from public consultations, as well as land use and environmental information. The former Liberal government halted the planning process for the highway in 2018 after an expert panel advised alternative options would deliver “comparable” benefits without occupying the valuable lands northwest of Toronto.

The Ministry of Transportation said the full environmental assessment for the major road project will take until the end of 2022.