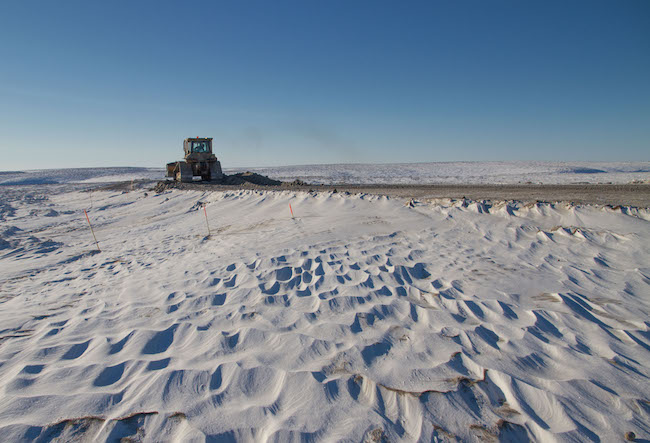 YELLOWKNIFE—Work is moving ahead on a major roadbuilding project in Northwest Territories.

The N.W.T. government signed an agreement Feb. 14 that will spur construction on a 97-kilometre route that will link the remote First Nations community of Whati with the Yellowknife Highway (also known as Highway 3), which runs around Great Slave Lake and is the only land link between the territory’s capital to the rest of the country.

The Tlicho All-Season Road will begin outside Behchokǫ on Highway 3 and run northwest to Whati, located on Lac La Martre in N.W.T.’s Tlicho region. Construction costs for the road are expected to reach $213.8 million, while the overall P3 contract to design, build, finance, operate and maintain the 2-lane gravel highway is set at $411.8 million. The federal government previously announced that it would pick up about 25 per cent of construction costs, but the provincial nod gives the project an official green light.

Related: Take an in-depth look at construction on the Inuvik Tuktoyaktuk Highway and some of the challenges builders face in Canada’s north

The province tapped the North Star consortium to take on the project. Led by Kiewit Canada Development Corp., the Tłı̨chǫ Government will also hold a 20 per cent equity stake in the project. The design-build team is made up of Peter Kiewit Sons ULC, Hatch Corp, and Thurber Engineering Ltd.

Along with improving transportation for local residents, the project is expected to fuel economic development in the region. Fortune Minerals Ltd., for instance, is working to develop a mine about 50 kilometres north of Whati. The Ontario-based mining firm, said it plans use the new Tlicho road and construct an additional spur road to connect to the proposed mine.

Construction on the road is expected to start in fall 2019, with substantial completion scheduled for winter 2021.