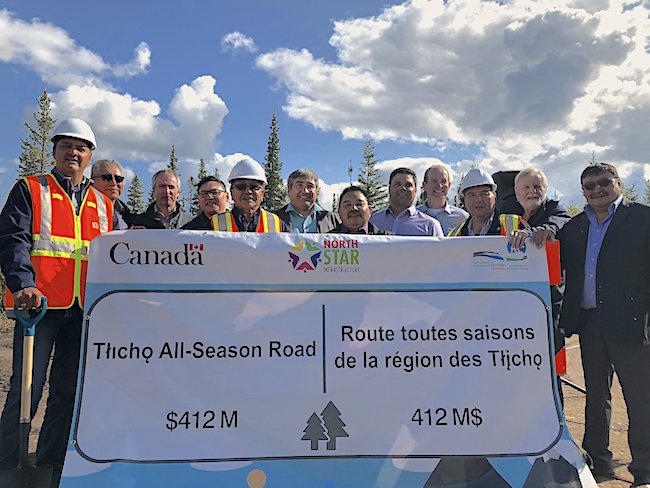 WHATI, N.W.T.—A major all-season road project in central Northwest Territories is officially underway after a groundbreaking Aug. 24 in the small community of Whati, northwest of Yellowknife.

The three-year construction project will link Whati, traditionally a fly-in community on Lac La Martre, to nearby Highway 3, which loops around Great Slave Lake to the territory’s capital and largest city.

“Less than three years after the official opening of the Inuvik Tuktoyaktuk Highway, the Government of the Northwest Territories, with our partners, is preparing to start yet another transformative highway project: the Tłı̨chǫ All-Season Road,” said Wally Schumann, the N.W.T.’s minister of Infrastructure and Industry, Tourism and Investment, in a release.

The 97-kilometre gravel route will connect with Hwy. 3 — often simply called the Yellowknife Highway — just west of Behchokǫ̀. It’s expected to boost tourism, as well as resource projects in the region. Ontario-based mining firm Fortune Minerals Ltd., for instance, is working to develop a mine in the area. The road will also greatly improve residents’ access to Yellowknife.

The province is using the P3 model to deliver the new project. It awarded a $411.8 million design, build, finance, operate and maintain contract to North Star Infrastructure last fall. Kiewit Canada Development Corp. holds a majority interest in the project, while the Tlicho Government owns a 20 per cent equity stake. Peter Kiewit Sons ULC, Hatch Corp., and Thurber Engineering Ltd. are taking on the design and construction stages of the work.

The new road is currently scheduled to open to traffic in 2022.