The $1.2 billion project added more than two dozen kilometres of highway and took about four years to complete 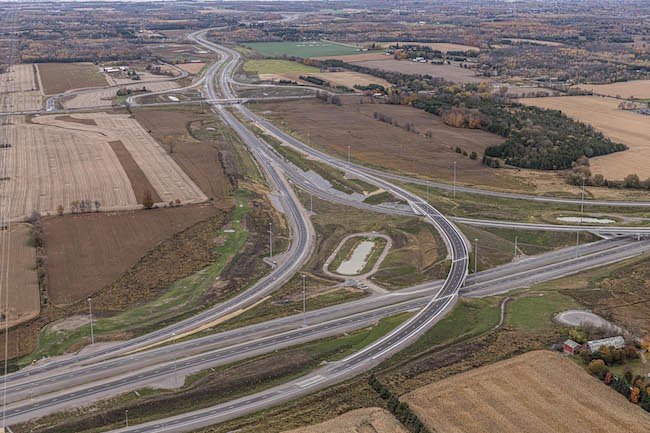 An eastern extension of Ontario Hwy. 407 and a new toll road to connect the lengthened highway to nearby Hwy. 401 opened Dec. 9 on the outskirts of Toronto.

With the addition of 14 kilometres of four-lane road on its far eastern edge, the 407 now stretches to Hwy. 35/115 in Clarington, Ont. Drivers can also reach the province’s main thoroughfare via a 10-kilometre north/south road, known as Hwy. 418, which links up with the 401 between Courtice and Bowmanville, Ont.

The two new segments of road are designed to relieve some pressure on the increasingly crowded 401 through Oshawa and Toronto’s other eastern suburbs. Combined with other sections of the 407, the latest extension allows through traffic to skirt around Toronto between Clarington and Burlington.

Construction of the highways cost approximately $1.2 billion and has been underway for about four years, with early work beginning in fall 2015. Blackbird Infrastructure, a consortium made up of CRH Canada Group Inc. and Spain-based Cintra Infraestructuras, spearheaded the Highway 407 East Phase 2 project. Dufferin Construction Co, a subsidiary of CRH and Ferrovial Agroman Canada were in charge of construction.

As the name implies, the latest project followed Phase 1 of the 407 expansion, which opened to traffic in 2016.

Phase 2 stretched the provincially-owned section of Hwy. 407 another 22 kilometres — from Harmony Road in Oshawa to Hwy. 35/115 — and added the 418 connection to make it easier for drivers to reach the 401. Construction included three highway-to-highway interchanges, as well as five entrances/exits to surface roads. Unlike the privately-owned and operated 407 ETR farther west, the extensions are owned by the province, though they are still toll roads.

The $1.2 billion contract for the highway project includes 30-years operations, maintenance and rehabilitation.