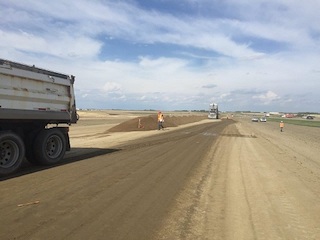 Early work on the highway twinning project outside Saskatoon. PHOTO: Government of Saskatchewan

The Saskatchewan government announced Sept. 23 crews working on a $66 million twinning project on Highway 7 between Saskatoon and Delisle are preparing to open a final 12-kilometre stretch of new highway to traffic. Weather permitting, the freshly-paved road will open before the end of September.

Officials say traffic volumes along the highway have increased about 20 per cent over the past 10 years — from about 3,000 vehicles per day to more than 3,500 today. The added lanes are expected to improve safety as well as the flow of traffic.

The completion of the final dozen kilometres of roadway near Vanscoy marks the end of the twinning project, which added a total of 33 kilometres of divided highway southwest of the province’s largest city. Construction on Hwy. 7 has been ongoing since 2015.